Parents Struggle as Schools Reopen During Rise in COVID-19 Cases

Update Required To play the media you will need to either update your browser to a recent version or update your Flash plugin.
By Ashley Thompson
05 August 2020


The first day of school is always a hard time for parents. But this year is different. Now, on top of the usual concerns about your child getting used to new teachers and classmates, there is COVID-19.

Rachel Adamus was feeling those emotions Monday morning as she got her 7-year-old son Paul ready for his first day of second grade. The same day she was preparing his 5-year-old sister Neva for the start of kindergarten.

Rachel Adamus struggled to balance her concerns about the coronavirus with her belief that her children need the socialization and in-person training that school provides.

COVID-19 has killed about 155,000 people in the United States. Adamus herself has lost two family members to the disease: an aunt in Alabama and her husband's great uncle in New Jersey.

In many parts of the country, new daily case numbers are rising.

Adamus said of her children, "We have kept them protected for so long...They haven't been to restaurants. We only go to parks if no one else is there...And now they're going to be in the classroom with however many kids for an entire day with a teacher." 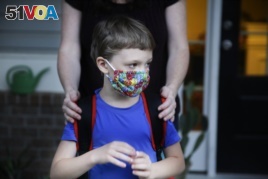 Rachel Adamus holds her son Paul, 7, in front of their house before the bus arrives for the first day of school on Monday, Aug. 3, 2020, in Dallas, Georgia, USA.

The Adamus children are among tens of thousands of U.S. students who began in-person classes Monday for the first time since March. Parents in Louisiana, Mississippi and Tennessee are also among those dealing with the start of the new school year this week.

Many schools that offer in-person classes are also giving parents a stay-at-home online education choice. Adamus, like many other parents, decided against that. Other schools are planning a mix of the two methods, with children going between in-person classes and online learning programs.

But a rise in COVID-19 cases in many states has led some areas to cancel in-person classes at least for the start of the school year.

However, Dr. Anthony Fauci, the nation's top infectious-disease expert, warned Monday that, in some places, bringing children back to school would not be "prudent." In other words, it would not be a wise move. That is because many cities and states are still dealing with rising case numbers.

Schools also reopened this week in the state of Indiana. One student at Greenfield-Central Junior High tested positive for COVID-19 on the first day back to class. The student was separated from others in the school's medical office.

"This really does not change our plans," said Harold Olin, who supervises the area's schools. "We knew that we would have a positive case at some point in the fall. We simply did not think it would happen on day one."

In Newton County, Mississippi, fourth grader Avery Mangum returned to school for the first time in months to find many things changed. She had to wear a face mask, sit in an assigned seat, and eat in her classroom instead of in the school's cafeteria. When students in her class moved around the school, they followed their teacher in a straight line with one arm held out in front of them. This is to make sure they stayed at least an arm's length away from other children.

The playground at Avery's school was divided in two parts. Some students could play on half of the equipment, and others on the other half.

It was really hard to socially distance while we were playing, Avery said. "Everyone wants to play with their friends and do all these things but we can't.

In Georgia's Paulding County, both of Adamus' children wore face masks. But school officials there have not made that a requirement.

Many teachers in Paulding are uneasy about the return to school. Some are shocked that the school district has refused to require face coverings or delay the start date for in-person classes, as nearby districts have done. But the labor unions representing Georgia's teachers are weak, so there has been little organized opposition.

"I desperately want to return to face-to-face teaching," Paulding teacher Steven Hanf told a school board meeting last month. "But not until it is safe," he said.

One student who did not start school in Paulding County this week was Aliyah Williams. Her mother, Erica Williams, decided to keep her 14-year-old daughter at home; two of her younger sons have a medical condition that puts them at risk.

Williams does not believe her daughter will fall behind in school if she continues her online studies. But she is worried about Aliyah's inability to see her friends.

"She's a social butterfly," Williams said. "That's a big part of her personality."

kindergarten - n. a school or class for very young children, usually age 5 or 6

park - n. a piece of public land in or near a city that is kept free of houses and other buildings and can be used for pleasure and exercise

positive - adj. showing the presence of a particular germ, condition, or substance

assign - v. to provide someone with something

cafeteria - n. a place (such as a restaurant or a room in a school) where people get food at a counter and carry it to a table for eating

(school) district - n. an area or region containing the schools that a school board is in charge of

desperately - adv. having a strong need or desire for something or to do something

(school) board - n. a group of people who are in charge of local schools

social butterfly - n. a person who loves to talk to and be with other people