People across America View Historic Total Eclipse of the Sun

Update Required To play the media you will need to either update your browser to a recent version or update your Flash plugin.
By VOA
21 August, 2017

The total solar eclipse was visible along a path about 110 kilometers wide across 14 states. This "path of totality" began in the western state of Oregon Monday morning. It ended in the afternoon in the southern state of South Carolina.

More than 100,000 people gathered in Madras, Oregon - a town with a population of just 7,000 – to be among the first to watch the total solar eclipse.

People from across the U.S. and around the world came together in many other areas to view the eclipse. Skies turned dark for about two minutes as the moon completely blocked the sun. In addition, temperatures dropped slightly and crickets could be heard making the noises usually heard only at night. 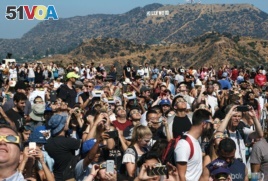 A crowd gathers in front of the Hollywood sign at the Griffith Observatory to watch the solar eclipse in Los Angeles on Monday, Aug. 21, 2017. (AP Photo/Richard Vogel)

Areas outside the total path only experienced a partial solar eclipse. This included the rest of North America, Central America and the top of South America.

Weather officials reported about 70 percent of skies were clear for the eclipse.

It was the first time in 99 years that a total solar eclipse passed over parts of the entire United States. It was expected to be the most watched and documented eclipse in history.

Scientists warn against looking directly at the sun without eye protection. But many people used special solar eyeglasses or pinhole viewers that can show an image of the eclipse into a box.

Mike O'Leary of San Diego, California – who has watched several eclipses in the past - traveled to Casper, Wyoming to view the total solar eclipse.

"It's like nothing else you will ever see or do," he told the Associated Press. "It can be religious. It makes you feel insignificant, like you're a speck in the whole scheme of things."

In Washington D.C., President Donald Trump, his wife Melania and their son Barron wore protective glasses as they watched the partial eclipse from a balcony of the White House.

Many people posted photos or their feelings about watching the eclipse.

In Nashville, Tennessee, Twitter user Dave McGuire posted a picture of the sun disappearing. "The Nashville eclipse is over... interesting to hear the crickets start chirping when it became dark."

Well-known scientist and television presenter Bill Nye tweeted his hope that the eclipse might even have a uniting effect. "The #solareclipse is upon us. I hope this day reminds us that we share a common origin in the stars & that we're citizens of the same planet."

Baseball fans in some American cities headed to ballparks to watch the eclipse. Minor league teams from Oregon to South Carolina scheduled games Monday to be played as the total solar eclipse passed across the United States.

People in some areas also went to local zoos, where animals are known to act differently during an eclipse. Officials at Nashville Zoo said people were already waiting in line to get inside the entrance at 6 a.m. Monday morning.

With all the excitement across America, one company that studies worker productivity said Monday the total solar eclipse could cost U.S. companies nearly $700 million. A report by Challenger, Gray & Christmas, Inc., estimated the losses due to a drop in worker productivity.

The estimate was based on the possibility that many workers across America could take a break of up to 20 minutes from their normal workday to observe the total solar eclipse.

For those who missed this total solar eclipse, the next one will be on July 2, 2019. But it can only be seen in the South Pacific Ocean and parts of Chile and Argentina.

Bryan Lynn reported this story for VOA Learning English. His report was based on stories from the Associated Press and other sources. Hai Do was the editor.

partial – adj. not complete or total

pinhole – n. very small hole the size of a pin

balcony – n. platform attached to the outside of a building