Just days ago, it looked like some of the most famous soccer teams in Europe were forming their own league, called the Super League. 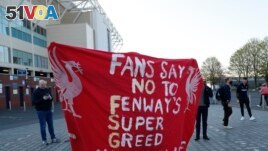 Two major governing bodies for soccer – FIFA and UEFA – threatened to ban those teams and their players from future games. The announcement led to anger from soccer fans. It also concerned officials in Great Britain, France and Italy.

Most of the British teams pulled out on Tuesday. Then on Wednesday, teams from Spain and Italy also decided not to join the league. Teams from France and Germany did not take part.

Some teams said they felt pressured to join the new league because they worried about being left behind. They said they did not want to upset their fans and did not think hard enough about the decision.

The teams said they started the league because they are having financial problems during the coronavirus pandemic. The U.S. bank J.P. Morgan had offered the teams about $4 billion to start the new league.

Fans called the 12 teams in the Super League "the dirty dozen." They were upset that teams would not have to win games to play in the league's tournament. Their places would be guaranteed. In order to play in the Champions League, teams must do well the year before.

Leeds players wore shirts saying "earn it" before their game against Liverpool. And fans' protests delayed the start of Chelsea's game.

Even players and managers on the breakaway teams seemed upset that they were not asked for their opinion ahead of time.

Luke Shaw, who plays for Manchester United, expressed his support for the current Champions League on Twitter. Jordan Henderson from Liverpool posted a similar message, saying he and other players on the team wanted to stay with the current system.

Aleksander Ceferin is the head of UEFA, the governing body of soccer in Europe. He had criticized the Super League plan on Monday. He said it was good that the teams reconsidered and admitted their error.

Ceferin added, "The important thing now is that we move on, rebuild the unity that the game enjoyed before this and move forward together."

Are you glad the teams abandoned their plans for the Super League? Tell us in the Comments Section and visit 51VOA.COM.

qualify –v. to have the right to do, have, or be a part of something

unity –n. the state of being in full agreement