Update Required To play the media you will need to either update your browser to a recent version or update your Flash plugin.
By George Grow
08 August, 2018


More than 130 people are now confirmed dead from a powerful earthquake that hit Central Indonesia on Sunday.

The numbers of dead and injured have risen since the 6.9 magnitude earthquake struck off the waters of Lombok Island. The quake also shook three small nearby islands called the Gilis, Bali, Sumbawa and parts of East Java.

Thousands of homes and other buildings were damaged. Indonesian officials say the quake displaced about 156,000 people on Lombok. They have been forced to stay in emergency shelters.

For years, Lombok has been a popular vacation getaway for Indonesians and foreigners alike. Days after the quake struck, the island's coast looked unusually empty, with many stores and hotels closed.

Any hotels still open are refusing to accept new customers because of safety concerns. Eateries and underwater diving businesses have suspended operations on what is usually one of their busiest months of the year.

"It went from high season just a few days ago to absolutely nothing now," says Howard Singleton. He owns a seaside restaurant in the west coast town of Senggigi. From his restaurant, customers can enjoy watching the sun setting behind a volcano on neighboring Bali.

Indonesian officials are still adding up earthquake losses. The National Disaster Mitigation Agency says the value of property destroyed and other damage could easily top $69 million.

Many vacationers fled Lombok after Sunday's earthquake, which came a week after a 6.4 magnitude quake.

"We've had light earthquakes in the past, but never anything like this," said Marcel De Rijk, owner of Puri Mas Resort. His seaside hotel and villa community will stay closed until September for repairs.

"I don't think people will choose Lombok anymore this summer," he said.

Cancellations of tour bookings for Lombok have increased, the Association of Indonesian Tours and Travel Agencies told Reuters.

Both experts and tourist businesses say the island's economy will recover, but the next few months will be difficult. 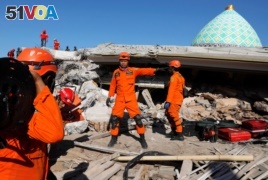 The quake could not have come at a worse time for Indonesian President Joko Widodo, who declared last month that Southeast Asia's largest economy "needs dollars now." He spoke at the start of a campaign aimed at strengthening the value of the rupiah, Indonesia's money. The rupiah has lost about six percent against the United States dollar since the start of 2018.

Widodo had ordered government ministers in July to find ways to build up Indonesia's tourism industry, which is mostly underdeveloped.

Tourism was directly responsible for less than 2 percent of Indonesia's economy in 2017. That is far less than Thailand and the Philippines, the World Travel and Tourism Council says.

Lombok is one of 10 areas that Indonesia hopes to develop. The ten are known as "the new Balis."

Widodo has set a goal of raising tourism earnings to eight percent of the country's Gross Domestic Product. He also wants the number of foreigners visiting Indonesia to reach 20 million a year.

The disaster may be a blow to those targets, but officials say they are not worried.

Any effect on tourism from the earthquakes will be temporary and not affect the International Monetary Fund and World Bank meetings on Bali in October, one official said.

De Rijk pointed to the return of tourists after the 2002 bombings on Bali in which 202 people died.

"History shows that even after the worst scenarios...tourists will always come back. Lombok is such a beautiful place," he said. 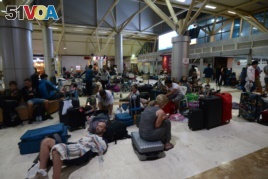 Foreign tourists sleep on the floor as they wait to depart from the Praya Lombok International Airport on the West Nusa Tenggara province on August 6, 2018.

Kanupriya Kapoor and Bernadette Christine Munthe reported this story for the Reuters news agency. George Grow adapted their report for VOA Learning English. His report includes information from VOANews. Hai Do was the editor.

magnitude – n. the intensity of an earthquake, as represented by a number

customer – n. a buyer; someone who purchases a good or service

villa – n. a small house where one can live when on vacation

tour – adj. of or involving travel

emerging markets – n. a term used to describe the economies of developing countries

Gross Domestic Product – n. the value of goods produced and services provided in a country during a year