Protests Cause US Officials to Rethink Use of School Police Officers

Update Required To play the media you will need to either update your browser to a recent version or update your Flash plugin.
By Ashley Thompson
09 June 2020


An increasing number of American cities are rethinking the presence of law enforcement officers in their schools.

City officials are considering ways to answer the concerns of thousands of people who have protested the death of George Floyd. In some areas, young protesters have been demanding the removal of officers from schools. 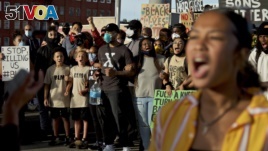 Portland Trail Blazers' Damian Lillard, center, joins other demonstrators in Portland, Ore., during a protest against police, sparked by the death of George Floyd, who died May 25 after being restrained by police in Minneapolis. (AP)

George Floyd, a 46-year-old black man, died May 25 in Minneapolis, Minnesota after a white police officer pressed his knee on his neck for nearly nine minutes. Floyd was handcuffed and lying on the ground. He can be heard saying "I can't breathe" in videos of his arrest and death.

"Leaders must listen and respond to community," Wheeler said. We must disrupt the patterns of racism and injustice."

Many in Portland have voiced support for the decision to remove the officers. But others raised immediate concerns about student safety in the event of a school shooting or other emergency.

Mo Canady is head of The National Association of School Resource Officers. He described any decision to remove the officers from schools as a "knee-jerk reaction." In other words, the decision happened very quickly and without much thought.

Canady added that the actions by a few school districts could cause many other districts to make the same decision. He said such moves cause harm to students around the country.

Canady called Floyd's death "atrocious" and the actions of the Minneapolis police "evil." But he said that when school resource officer programs are "done right," they can be good examples of community-based policing.

But critics of the programs say the officers' presence can also lead to the criminalization of students, especially students of color. In 2015, a school resource officer in South Carolina was caught on video forcing a female student on the ground and pulling her across a classroom. The student had refused to surrender her phone to the officer.

There are an estimated 25,000 school resource officers nationwide, Canady said.

Across the United States, 43 percent of public schools had an armed law enforcement officer present at least once a week in the 2015-2016 school year. That was the last year the National Center for Education Statistics studied the issue.

handcuffed - v. to put a set of two metal rings that are joined together and locked around a person's wrists

district - n. an area or section of a country, city, or town

counselor - n. a person who provides advice as a job

bullying - v. someone who frightens, hurts, or threatens smaller or weaker people

disrupt - v. to interrupt the normal progress or activity of (something)

pattern - n. the regular and repeated way in which something happens or is done

mayor - n. an official who is elected to be the head of the government of a city or town