Update Required To play the media you will need to either update your browser to a recent version or update your Flash plugin.
By Jonathan Evans
08 June 2021

Researchers say the drug may become a new way to treat patients with other hard-to-reach or inoperable cancers.

The study tested a new kind of medicine called radiopharmaceuticals. These drugs deliver radiation directly to cancer cells. The drug in this case is a molecule that contains two parts: one that hunts for the cancer cells and another that kills them. 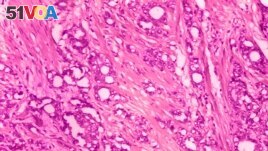 This 1974 microscope image made available by the Centers for Disease Control and Prevention shows changes in cells indicative of adenocarcinoma of the prostate.

Trillions of these molecules hunt down cancer cells, then they are killed by radiation.

"You can treat tumors that you cannot see. Anywhere the drug can go, the drug can reach tumor cells," said Dr. Frank Lin. He works at the National Cancer Institute helping to develop such medicine but did not take part in the study.

The American Society of Clinical Oncology recently released the results of the study. The drug's maker, Novartis, paid for the research. The company plans to seek approvals in the United States and Europe later this year.

When cancer is found only in the prostate, radiation can be directed onto or inside the body.

But those methods do not work well in more severe cases of prostate cancer. Each year, about 43,000 men in the United States are diagnosed with prostate cancer that has spread and no longer responds to usual treatment.

The study involved 831 men with severe prostate cancer. Two-thirds were given the radiation drug, while the rest of the group were not. Patients received the drug every six weeks, up to six times.

After about two years, those who received the drug did better, on average. The cancer was controlled for nearly nine months compared to about three months for the others. Survival was better, too — about 15 months compared to 11 months.

The gain may not seem like much, but "these patients don't have many options," said Dr. Lori Pierce, president of the American Society of Clinical Oncology.

Radioactivity can reduce blood cell production. That can lead to anemia and other blood problems for patients. In the study, 53 percent of the patients had serious side effects. That compares to 38 percent of patients who did not receive the drug. Both groups were permitted to get other treatments.

The results lead the way for government approval and will increase interest in radiation drugs, Lin said.

Xofigo, produced by drug maker Bayer, is approved for men whose prostate cancer has spread to the bone but not elsewhere. The drug targets areas where the body is trying to repair bone loss from tumor damage. But it is not directly aimed at prostate cancer cells, wherever they may be in the body.

Since the experimental drug targets tumor cells, "that would be a first for prostate cancer," Lin said.

In the next 10 years, such drugs will be a big part of cancer research, said Dr. Charles Kunos. He worked at the National Cancer Institute before joining the University of Kentucky's Markey Cancer Center. "It will be the next big wave of therapeutic development," he added.

options – n. something that can be chosen; a choice or possibility

therapeutic - adj. producing good effects on your body or mind