Update Required To play the media you will need to either update your browser to a recent version or update your Flash plugin.
By Christopher Jones-Cruise
25 June, 2017


The ability to regenerate or recreate missing body parts sounds more like part of a science fiction story than reality.

But researchers are finding evidence that regeneration may be possible someday in the future with improvements in technology. They imagine using 3D-printing to make a kidney for someone in need of a replacement. They also talk about possibly using bioelectricity to cause cells to build new tissue and organs.

These ideas and others were discussed earlier this month at the World Science Festival in New York City. The presentation was called "Forever Young: The Promise of Human Regeneration."

Scientists talked about the future of regenerative medicine, which combines the body's ability to heal itself with progress in biomedical engineering. 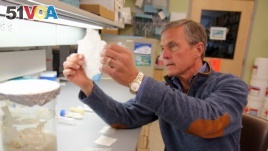 This undated photo provided by the University of Pittsburgh Medical Center shows Dr. Stephen Badylak, a surgery professor at the university, and deputy director of the McGowan Institute for Regenerative Medicine.

Dany Spencer Adams is a research professor at Tufts University in Massachusetts. He told VOA that researchers have found that bioelectrical signals can lead to cellular processes in frog tadpoles. He said such signals may someday start the formation of nerves, muscles and other body parts.

"This is the cells themselves using electricity to communicate," he said.

In an experiment, a frog re-grew one of its legs in six months. But scientists first had to make changes in the characteristics of the animal's cells.

Researchers say they have a lot more work to do before the process can be used on human beings. They have to learn which bioelectric signals can influence the formation of which organs.

Adams says "it's better to regenerate that organ so that you don't have issues of the immune system attacking, the way we do now with transplants. The hope is that we'll be able to help the body create a better replacement -- really, a perfect replacement, for the person of exactly what they've lost."

Jonathan Butcher is a professor and biomedical engineer at Cornell University in New York. He and other researchers have combined mechanical engineering with developmental biology to create working heart valves from 3D-printed tissue.

Children may get the most help from engineered organs or partial organs that can grow as the child does.

science fiction – n. stories about how people and societies are affected by imaginary scientific developments in the future

3-D – n. made in a way that causes an image to appear to be three-dimensional

transplant – n. an organ, piece of skin, etc., that is transplanted