Update Required To play the media you will need to either update your browser to a recent version or update your Flash plugin.
By Pete Musto
15 August 2020

Like many other students around the world who completed their higher education in 2020, the coronavirus health crisis is creating problems for her future career path.

The coronavirus forced the cancellation of St. Leger's final-year fashion show, which is usually part of her university's graduation ceremonies. This removed the chance for her to show her knitwear clothing collection to people in the industry, some of whom might have liked her work enough to offer her a job.

Instead, the 23-year-old returned to her family home in Winchester, southern England, and presented her classwork online. She has applied for about 40 jobs, but has not yet received any offers.

"All the jobs have all dried up - everywhere," St. Leger told the Associated Press. She knows graduates from past years who have been dismissed from their jobs or are temporarily out of work, so now she is prepared to seek a job outside of her industry. One possibility would be in food service.

"It's still hard to be hopeful when you're not seeing anyone doing well at the moment," she said. 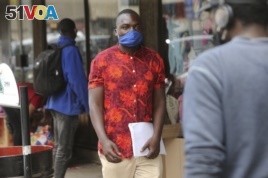 Emmanuel Reyai walks on the streets of Harare while looking for a job, Wednesday, Aug, 5, 2020.

Young people everywhere armed with new degrees and professional qualifications are struggling to enter the workforce as the health crisis pushes the world's economy into recession. COVID-19 has limited the hopes of graduates getting their first jobs, an important step in building new careers. Many employers have had to reduce efforts to employ recent graduates or even withdraw job offers.

The latest unemployment numbers for the United States demonstrate this difficult situation. Government data shows that while 1.8 million jobs were added in July, this marked a sharp slowdown in employment growth from the month before. This means the world's biggest economy has regained just 42 percent of jobs lost to the coronavirus.

U.S. careers website Glassdoor says the number of jobs advertised as "entry level" or "new grad" was down 68 percent in May from a year ago. In Britain, the Institute of Student Employers contacted 179 businesses and found they planned to cut student employment by 23 percent this year.

The wave of delayed employment will spread through the economy, says Brian Kropp. He is the chief of human resources research at industry advisory company Gartner.

Many graduates will have student loan debts they will not be able to start paying off until they find a job, he said.

"If you can't get an entry level job today, that means that you don't move out of your parent's house, you don't develop real work experience, you don't buy your first home until later, and you don't get married until later," Kropp said.

One important long-term effect for young graduates who take longer to find good first jobs is lower pay throughout their careers, experts say. Someone who takes a year or more to find their first job is likely to fall behind when it comes to promotions and must also compete with younger people who enter the job market later.

Job advertisement search engine Adzuna reports that in 10 countries, unfilled positions seeking graduates for July are down from the year before. Britain, India and the Netherlands have seen the biggest decreases, with advertisements down by more than half from a year ago. But other countries - including Austria, Australia, Brazil, and France - are also seeing major decreases.

Maria Jose Casco, a newly qualified doctor, has not found work after graduating in Ecuador in April. The 24-year-old graduate said she's been searching for health-related jobs as well as work in other industries.

Even though the health crisis created a need for more health services, she found that employers are not offering full-time jobs.

"They're looking for temporary staff they can easily fire," Casco said. She and her husband are living off savings and his $480 monthly earnings and, like others, are considering moving to a different country.

Emmanuel Reyai graduated from Zimbabwe's Midlands State University two years ago. But the 24-year-old is no closer to his goal of getting a job related to his degree in local governance. His search is limited by both the African country's economic collapse and the spread of the coronavirus.

For some, however, there are happy endings.

In China, 23-year-old Li Xin graduated this summer with a statistics degree but had been looking for a job since January. Some classmates found banking jobs thanks to their connections. Others without ties ended up in industries unrelated to their degrees. Several are doing tutoring jobs, and Li found one herself but it lasted just a week.

She felt hopeless but also recognized that everyone has it hard.

"I'd sit in the subway, seeing the people come and go around me, and I'd suddenly feel that it wasn't easy for anyone," Li said.

Eventually, she found a job in data research in her hometown near Beijing that started this month. But more than half of her class, have yet to be so lucky.

applied for – p.v. to ask formally for something, such as a job, admission to a school, or a loan, usually in writing

degree(s) – n. an official document and title that is given to someone who has successfully completed a series of classes at a college or university

qualification(s) – n. an official record or document, such as a degree, certificate, or diploma, which shows that you have completed a course of study or training and are qualified to do something

promotion(s) – n. the act of moving someone to a higher or more important position or rank in an organization

fire – v. to dismiss someone from a job

tutoring – n. the act of teaching a single student