Report: Asia Now Has More Billionaires than US

Update Required To play the media you will need to either update your browser to a recent version or update your Flash plugin.
By Bryan Lynn
02 November, 2017


A new report finds that for the first time, Asian billionaires outnumber those in the United States.

The number of Asian billionaires rose by nearly one quarter in 2016 to 637, according to the report published by UBS Group AG and PricewaterhouseCoopers.

UBS is a financial advisory company that serves wealthy people around the world. PricewaterhouseCoopers is an international company providing accounting and tax services.

The report counted 563 billionaires in America and 342 in Europe. It found that while the U.S. no longer has the most billionaires, it still has the most overall billionaire wealth. This is because more of the world's wealthiest individuals live in the United States. 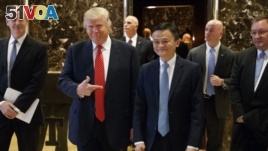 President-elect Donald Trump stands with Chinese billionaire Jack Ma, Executive Chairman of Alibaba, as they walk to speak with reporters after a meeting at Trump Tower in New York, Jan. 9, 2017.

The total wealth of U.S. billionaires rose to $2.8 trillion in 2016, compared to $2.4 trillion the previous year. Most of the increase in wealth came from technological innovation, followed by financial services and materials, according to the report.

If the current trend continues, the total wealth of Asian billionaires is expected to be higher than all U.S. billionaires in about four years.

Worldwide, the report said total billionaire wealth rose 17 percent in 2016 to $6 trillion. This was largely fueled by the increase in Asian billionaires. It also came from strong economic growth in materials, industrial production, financial services and technology.

In Europe, billionaire wealth remained largely unchanged from 2015 to 2016. Overall wealth grew just 5 percent to $1.3 trillion. Europe added 24 new billionaires in 2016, while 21 dropped off the list, a third of them due to death.

The report estimated that the 1,542 billionaires studied either owned or partly owned companies that employ at least 27.7 million people worldwide.

Billionaires in various countries are increasingly putting more of their money into philanthropy, art and sports. Many invested in major sports clubs, including soccer, baseball and basketball. "According to our analysis, more than 140 of the top sports clubs globally are owned by just 109 billionaires," the report said.

Bryan Lynn wrote this story for VOA Learning English, based on a study from UBS Group AG and PricewaterhouseCoopers. Kelly Jean Kelly was the editor.

accounting – n. system of keeping financial records for a business or person