Update Required To play the media you will need to either update your browser to a recent version or update your Flash plugin.
By Dan Friedell
13 February 2021


The island nation of Madagascar, off the east coast of Africa, may be home to the smallest kind of reptile in the world. The chameleon, at only 13-and-one-half millimeters long, could fit on the end of your finger.

The new species was given the scientific name Brookesia nana, but it is also called the nano-chameleon. It appears to have broken the old record for reptile size by 1.5 millimeters. 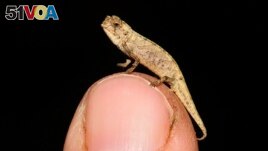 Picture taken in 2012 in Munich, Germany shows a newly discovered species of chameleon which is a contender for the title of world's smallest reptile. (AP Photo/Frank Glaw)

A Madagascar nature guide discovered two of the animals, a female and male, on a mountainside in 2012. Researchers from Madagascar and Germany began studying the animals. The female was larger. Tests showed she was an adult carrying two eggs.

The team's findings appeared in the publication Scientific Reports.

German scientist Frank Glaw, the lead researcher on the team, is an expert on amphibians and reptiles of Madagascar.

He said these new lizards are so small "you really have to get down on your knees to find them."

Like other chameleons, they can hide by changing their appearance to blend with their environment. Glaw also noted that the nano-chameleon moves very slowly.

Among the more surprising discoveries is the size of the male's reproductive organs, which make up 20 percent of the animal's body size. The researchers think this quality may assist its mating efforts with the larger female of the species.

Researchers are searching for other Brookesia nana on Madagascar. They say the nano-chameleon lives in a forest area of Madagascar that humans are cutting down for agriculture space and wood.

However, team researcher Oliver Hawlitschek said the area has recently been named as a protected space. "Hopefully, that will enable this tiny new chameleon to survive," he said.

The Associated Press wrote this story. Dan Friedell adapted it for Learning English. Caty Weaver was the editor.

blend in - v. to look like what is around you