Update Required To play the media you will need to either update your browser to a recent version or update your Flash plugin.
By Bryan Lynn
20 March, 2018


The suspect who killed 17 people at a Florida high school last month took part in a school program that included training in shooting skills.

The man charged in the attack, 19-year-old Nikolas Cruz, was a former student at Marjory Stoneman Douglas High School in Parkland, Florida, where the February 14 shooting happened.

Nikolas Cruz is lead into the courtroom before being arraigned at the Broward County Courthouse in Fort Lauderdale, Fla., on Wednesday, March 14, 2018. (Amy Beth Bennett/South Florida Sun-Sentinel via AP, Pool)

Cruz had been a member of the school's Army Junior Reserve Officer Training Corps (JROTC).

The JROTC program is operated by the U.S. Department of Defense. The organization has about 314,000 high school-age members, called "cadets." The program is modeled after the U.S. military forces and members wear military-style uniforms.

The Defense Department describes the JROTC program as a "character and leadership development program" for the nation's high school students.

Many local JROTC leaders are retired officers from the Army, Navy, Air Force and Marines. Some students join the group to prepare for planned military service after graduating. But JROTC leaders say most members do not end up joining the military. Three victims killed in the Parkland, Florida shooting were current members of the JROTC program at the school.

Some former JROTC cadets spoke to the Associated Press about target shooting with Nikolas Cruz and attending competitions with him. "He was a very good shot," said 20-year-old Aaron Diener. He says he gave Cruz rides to shooting competitions when they were on the same four-member team in 2016.

Kyle Ramos, another cadet in the same JROTC group, told the AP that Cruz spoke about guns and knives a lot and liked to wear military-style clothing to school. He said he also talked about shooting animals "like squirrels and lizards" with pellet guns for fun.

The Florida school mass shooting led some major companies to cut ties with the National Rifle Association, or NRA. Some stores decided to raise the age to 21 to buy guns in their stores. Others said they would no longer sell assault-style weapons. In the attack, Cruz used an AR-15 semi-automatic weapon that was bought legally.

The NRA is the largest American organization representing the interests of gun owners. The organization also provides money to some schools for JROTC. It supports other school programs meant to get students interested in shooting sports. These include gun teams, hunting safety classes and farming groups.

A recent AP investigation found the NRA provided more than $7.3 million in grants to hundreds of U.S. schools from 2010 through 2016. NRA financial records studied by the Associated Press show the organization provides grants to schools through its Friends of NRA program. The NRA says the money supports national, state and local shooting sports programs. The NRA reports on its website it awarded a total of 3,000 grants in 2017.

The AP investigation showed the largest amount of NRA grant money went to JROTC programs. Grants are often provided to schools as equipment rather than money. This could include guns, ammunition, safety equipment and improvements to shooting areas. Nationally, about $1.3 million in grants were provided as money, while $6 million was provided through equipment, training and other costs, AP reported. 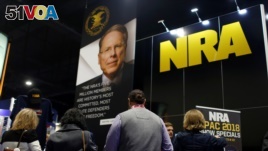 People sign up at the booth for the National Rifle Association at the Conservative Political Action Conference at National Harbor, Maryland, Feb. 23, 2018.

The NRA Foundation did not return calls seeking comment from the AP.

Schools are required to apply for grant awards. But the AP reported that as of March 9, only two school districts had decided not to accept NRA grants following the Parkland shooting.

Broward County Public Schools – where the attack happened – was the first to decide to stop accepting NRA money. Denver Public Schools also recently said it would turn down several NRA grants that were to be awarded this year.

Billy Townsend is a school board member in Florida's Polk County district, which received $33,000 for JROTC. "Whatever I think of the NRA, they're providing legitimate educational services," he told the AP. He added that he would not have any problem with the NRA continuing to provide money for air guns for JROTC.

Sergeant Jim Flores, a JROTC teacher at Cibola High School in Albuquerque, New Mexico, agrees. He says the program offers young people a lot more than gun training. "The safety that we're teaching, the good citizenship that we're teaching here, those are the things you don't hear about," he said.

School board members in some districts said they didn't know about the NRA grants. Donna Corbett is a school board member in southern Indiana's New Albany-Floyd County School Corporation. She said she did not know that $65,000 went to a JROTC program at a high school. She says she plans to bring up the issue for discussion with the board. But overall, she finds the JROTC program good, and said she is not sure she would want all grant money cut because of the gun training.

Jana Cox is a parent in Louisiana's Caddo Parish. She says few people in her area would have a problem with the $24,000 in NRA grants that went to school JROTC programs. "Everyone here has guns. This is north Louisiana. You've got a lot of hunters and you've got a lot of guns," she said.

Bryan Lynn wrote this story for VOA Learning English, based on reports from the Associated Press and other sources. Hai Do was the editor.

cadet – n. young person training to be in a military organization

character – n. the way someone thinks, feels, and behaves

discipline – n. way of behaving that shows a willingness to obey rules or orders

therapeutic – adj. producing good effects on your body or mind

pellet – n. small metal object that is shot from a gun

grant – n. amount of money given to someone by a government, company, etc., to be used for a particular purpose