Update Required To play the media you will need to either update your browser to a recent version or update your Flash plugin.
By Bryan Lynn
15 March 2020


Researchers have observed a huge planet in another solar system that they say likely receives rain in the form of hot, liquid iron.

The world is an exoplanet -- a planet that orbits a star outside our own solar system. The exoplanet, called WASP-76b, is made mainly of gas.

WASP-76b sits about 640 light years away from Earth. It is nearly two times the size of Jupiter, the largest planet in our solar system.

WASP-76b is part of a family of exoplanets considered "ultra-hot" gas giants. The planet is extremely hot because it is very close to its parent star, which is almost twice as big as our sun. 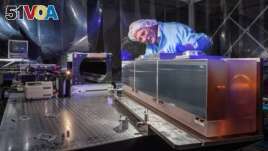 This photo shows testing of the European Southern Observatory's ESPRESSO spectrograph instrument. ESPRESSO is attached to the observatory's Very Large Telescope, which mapped information about the exoplanet WASP-76b.ESPRESSO is pictured undergoing testing

WASP-76b takes as long to go around its axis as it does to go around the star. The result is temperatures of more than 2,400 degrees Celsius on the planet's star-facing side. This makes WASP-76b one of the most extreme exoplanets in terms of its climate and chemistry.

Researchers from Switzerland and other parts of Europe observed WASP-76b with a powerful telescope belonging to the European Southern Observatory. The observatory is based in Chile. It provides astronomy support to a number of European countries.

Instruments attached to the observatory's Very Large Telescope helped collect information about the exoplanet. Research findings were recently published in the journal Nature.

Scientists have learned that the planet is so hot that molecules separate from atoms. The extreme heat also causes metals, like iron, to evaporate into the atmosphere. The researchers say the iron likely changes into liquid on the cooler side of the planet, and then almost surely turns into rain.

Christophe Lovis of the University of Geneva was one of the lead researchers of the study. He told The Associated Press that such a process is thought to produce "droplets of metal falling from the sky."

The research team believes that the iron rain is likely to be extremely dense and strong. Lovis said, "It's like in the heavy steel industry on Earth where they melt iron, and so you see this melting, flowing metal. That's pretty much what we are talking about here."

David Ehrenreich is a University of Geneva astronomer who helped lead the research. He told the Reuters news agency that this kind of hot, iron rain might only happen on ultra-hot exoplanets.

"The extreme atmospheric conditions met in WASP-76b and its siblings - other ‘ultra-hot' gas giants - are not found anywhere in our solar system and would be very difficult to reproduce in a lab," Ehrenreich said.

Astrophysicist Maria Rosa Zapatero Osorio of the Center for Astrobiology in Madrid, Spain, was also part of the research team. She said of the findings: "The ‘zoo' of planetary systems is far beyond our expectations."

Bryan Lynn wrote this story for VOA Learning English, based on reports from The Associated Press, Reuters and the European Southern Observatory. Ashley Thompson was the editor.

axis – n. a real or imaginary line on which something rotates

sibling – n. a sister or brother