Update Required To play the media you will need to either update your browser to a recent version or update your Flash plugin.
By Susan Shand
31 July, 2019


A U.S.-based group is reporting the first successful artificial insemination birth of a southern white rhinoceros in North America.

The announcement came from San Diego Zoo Global, in San Diego, California. It describes the birth as an important step in saving another white rhino species from extinction. 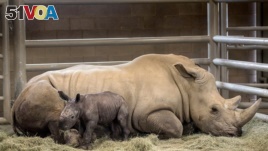 "All of us at San Diego Zoo Global are (happy) with the arrival of this special rhino calf," said Barbara Durrant. She works as the zoo's director of reproductive science.

Doctors use artificial insemination methods to treat infertility in people and other creatures.

San Diego Zoo Global reports that scientists gave Victoria a hormone, which caused her reproductive system to release an egg. Next, scientists injected semen from a male southern white rhino named Maoto. His reproductive fluid was collected and frozen before he died.

Victoria's pregnancy was confirmed in March of 2018. She carried her baby for over a year — 493 days. Mother and baby will be kept away from the public to give them time to form a relationship.

The calf will eventually meet the other five female rhinos at the Nikita Kahn Rhino Rescue Center. One of the five is named Amani. Scientists expect her to give birth in September or October.

The new baby rhino "represents a critical step in our effort to save the northern white rhino from...extinction," Durrant said.

Scientists collected sperm from Sudan and other males before they died. Now, those scientists hope to use that sperm to help bring back the species.

Rhinos have long been hunted, and several sub-species are at risk of disappearing forever. The International Union for Conservation of Nature has put the southern white rhino on its Red List of Threatened Species.

artificial insemination – n. a medical process in which male reproductive fluid is used to make a woman or female animal pregnant without sex

hormone – n. a substance produced in a living organisms and transported in tissue fluids

semen – n. the sticky, whitish liquid that is produced by a male's sex organs

embryo – n. a human or animal in the early part of development