Update Required To play the media you will need to either update your browser to a recent version or update your Flash plugin.
By Susan Shand
27 July, 2018


Cambodians vote Sunday for all 125 seats in the country's National Assembly.

Prime Minister Hun Sen's Cambodian People's Party is expected to stay in power. The party has won every election for the past 20 years.

In the 2013 election, the opposition Cambodian National Rescue Party (or CNRP) disputed the results. It accused the ruling party of fraud and refused to enter parliament to claim its 55 seats.

The boycott set off protests against the government that resulted in violent attacks on demonstrators by security forces. The protests ended in July 2014 when the opposition party met with government officials and agreed to enter parliament.

Since then, the government has put intense pressure on the opposition. Its leader Sam Rainsy was accused of insulting the government and lost his parliamentary right. He is barred from returning to Cambodia or running in elections.

In February 2017, Rainsy gave leadership of the opposition party to Kem Sokha. Seven months later, Kem was arrested and accused of planning a U.S.-backed revolution in Cambodia. 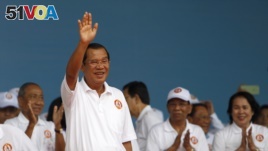 While 20 parties are expected to run in Sunday's election, the CNRP was seen as the only serious threat to Hun Sen's party and leadership.

The United Nations has called the election "flawed" because of the government's actions against the CNRP and its leaders. The United States and the European Union have withdrawn financial support for the election.

The Cambodian government has also pressured independent media in the past year. The Cambodia Daily newspaper announced in September that it would go out of business after getting a $6.3 million tax bill. The newspaper's publishers said the tax bill was driven by politics.

The pressure has also affected radio stations, including the Phnom Penh office of Radio Free Asia, which also closed in September. Two journalists who worked for Radio Free Asia were arrested and accused of spying.

Cambodia's government said about 220 election observers from 52 countries will watch for problems with Sunday's vote. But critics say many of the observer groups are linked to the ruling party.

On Wednesday, Cambodia's armed forces made a show of power with anti-riot equipment and assault rifles. Cambodian forces had used such equipment in an attack on anti-government protesters in January 2014.

The Phnom Penh police chief told Reuters that security forces will be stationed across the capital city to keep order during Sunday's vote. He said police will stop any protests or anyone urging others not to vote.

Susan Shand adapted this story for Learning English from VOA News reports. Hai Do was the editor.

flaw – n. a mistake or imperfection