Update Required To play the media you will need to either update your browser to a recent version or update your Flash plugin.
By Jonathan Evans
11 June, 2018


Russia is making final preparations for the 2018 World Cup.

The championship of international football opens this Thursday, and will continue until July 15. Football, or European football, is known as soccer in the United States.

At the start of World Cup action, Russia's national football team has the lowest rating of the 32 teams in the competition. 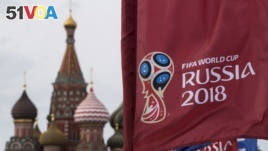 A flag with the logo of the World Cup 2018 on display with the St. Basil's Cathedral in the background, in Moscow, Russia, Monday, June 4, 2018.

Russia and Saudi Arabia are to play Thursday in Moscow. They are the two lowest-ranked teams at this year's World Cup.

Chile is the highest ranked team not playing in the World Cup. It is number 9 on FIFA's list. The Netherlands, Wales and Italy are three other teams among the top 20 that failed to win an invitation to Russia for the games.

At number 15, Mexico is the top team from North America, Central America and the Caribbean. Tunisia is considered Africa's best. It is in 21st place in the world ratings. The best Asian confederation team is Australia, which is in 32nd place.

There are a total of 64 football matches at the 2018 World Cup. The final match is set for Sunday, July 15 at Moscow's Luzhniki Stadium.

Jonathan Evans adapted this story from an AP News report. George Grow was the editor.

confederation – n. a group of people, countries, organizations, etc. that are joined together in some activity or effort