The warning came during Putin's yearly state-of-the-nation address. He directed strong words at critics who are concerned about Russia's recent build-up of troops along its border with Ukraine.

The United States and its allies have urged Russia to pull the troops back. In recent weeks, tensions between Russia and Ukraine have increased as both countries violated ceasefire agreements.

While saying he did not want to "burn bridges" in the international community, Putin did say he would defend his country's interests. He said Russia's answer to outside threats would be "quick and tough."

He did not define where the "red line" would be on a number of issues, but said "we will determine where it is ... in each case."

Putin said no foreign country should be able to tell Russia what it can do on its own land, and that includes increasing the number of soldiers on its border with Ukraine. 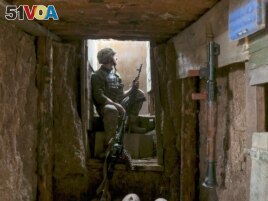 A Ukrainian soldier is seen at fighting positions on the line of separation from pro-Russian rebels near Donetsk, Ukraine, April 19, 2021.

He was speaking about economic restrictions placed last week on Russia by U.S. President Joe Biden's administration. The action came after U.S. officials accused Russia of attempting to influence the 2020 election and hacking into U.S. computer systems. The U.S. also sent 10 Russian diplomats home, investigated a number of Russian companies and restricted the country's ability to borrow money.

Putin has denied the U.S. accusations. In response, Russia put its own penalties on the U.S., including sending 10 diplomats home and restricting the way the U.S. Embassy can operate in Russia.

In his speech, Putin also said he would direct his country to continue to modernize its military. That includes buying and developing missiles and weapons. He said work continues on an underwater unmanned vehicle that can carry nuclear weapons and also a nuclear-powered missile.

He asked other nations to recognize that Russia has its own interests and "will always find a way to defend its position." He warned other countries not to use "selfish and arrogant" language when speaking about Russia.

Putin questioned why Western governments were quick to criticize Russia but did not speak out against a failed attempt to assassinate Alexander Lukashenko, a Russian ally and the president of Belarus. He condemned political interference by foreign governments in other countries as well, saying it "goes over the top and crosses all boundaries."

While Putin targeted his critics, he also praised his country's progress in the last year. He noted Russia's fast development of vaccines against COVID-19 and put forward economic plans aimed at helping the country recover from the pandemic. He urged more Russians to get vaccinated so the country could reach herd immunity faster.

Vladimir Isachenkov wrote this story for the Associated Press. Dan Friedell adapted it for Learning English. Bryan Lynn was the editor.

Do you think a Western country will ‘cross the line with Russia?' Tell us in the Comments Section and visit 51VOA.COM.

burn a bridge –v. a phrased used to signify breaking a connection between two people or organizations

determine –v. to officially decide something because of evidence or facts

motivate –v. to give someone a reason for doing something

sanctions –n. an action that is taken or an order that is given to force a country to obey international laws by limiting or stopping trade with that country, by not allowing economic aid for that country, etc. — usually plural

hacking –v. to secretly get access to the files on a computer or network in order to get information, cause damage, etc.

selfish –adj. having or showing concern only for yourself and not for the needs or feelings of other people

boundary –n. a limit on something

herd immunity –n. when enough people in a group or society are protected from a disease due to vaccination or prior infection to keep others safe