Russia to Spend Billions on Gas Pipeline in Pakistan

Update Required To play the media you will need to either update your browser to a recent version or update your Flash plugin.
By Christopher Jones-Cruise
18 February, 2016


Russian President Vladimir Putin is expected to visit Pakistan in the next few months to begin a gas pipeline project.

Mobin Saulat heads Inter State Gas Systems, the Pakistani company that would build the pipeline. He says Putin may visit Pakistan before June. 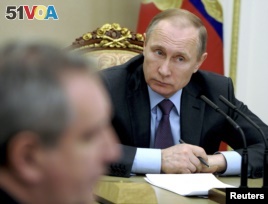 He says Russia is interested in the project because 200 million people live in Pakistan, and investing in the country could help Russia gain influence in other South Asian nations.

When Pakistani officials and energy experts visited Moscow recently, they met with the heads of three large Russian energy companies for the first time in more than 20 years. He says that shows Russia's interest in Pakistani energy issues.

Saulat says he believes the pipeline is the first of many investments Russia will make in Pakistan.

Experts say both countries may have strategic and political reasons to work together on the gas pipeline project.

Pakistan has tried to form new partnerships to reduce its dependence on the United States and China.

Russia will spend about two to $2.5 billion dollars on the project. That is almost 85 percent of the cost.

The 1,100-kilometer-long pipeline will be able to transport 34 million cubic meters of gas per day throughout Pakistan from Karachi to Lahore. The first part of the project is expected to be finished in two years. The last two parts are set to be completed in 2019.

Ayeesha Tanzeem in Islamabad reported on this story for VOANews. Christopher Jones-Cruise adapted the report for Learning English. Kathleen Struck was the editor.

pipeline – n. a series of connected pipes that carry liquids and gases over a long distance

strategic – adj. of or relating to a general plan that is created to reach a goal, usually over a long period of time