Update Required To play the media you will need to either update your browser to a recent version or update your Flash plugin.
By Phil Dierking
08 December, 2017


Yvonne Kevia is an 18-year-old high school student in Rwanda. She wants to become a chemical engineer. She enjoys doing experiments and taking careful notes in her high school laboratory in Kigali, Rwanda's capital city.

Kevia's interest in science is important to her. But it is also part of a larger goal for the Rwandan government: to prepare more girls for science and technology related careers.

The hope is to also create a model for other African governments to follow.

"Yes we can as girls"

Many girls in Kevia's class are also interested in careers in science and technology. Keza Marie Aimeé is one of them. She plans to become a pilot. Her backup plan is to be a pharmacist, she says.

"The first thing which came into my mind before choosing this school is that I wanted to live with girls who know what they want. The reason I want to become the pilot is that we're having few girls who are pilots and I want to show people that yes, we can as girls."

Aimée and Kevia both attend the FAWE Girls' School. It is one of many STEM-centered schools in Rwanda that have opened in the past ten years. STEM is an education program that specializes in learning science, technology, engineering, and math.

Keza says she chose to attend the FAWE Girls' school because she wanted to be around goal-oriented girls.

FAWE is considered one of the country's best STEM schools. The boarding school admits girls from poor families. On national exams, the FAWE's students often score in the top percentile.

Pascale Dukuzi is a chemistry teacher at FAWE Girls' school. He says it is important to encourage girls to study STEM fields.

"...Believing that they have that potential of doing sciences as well as boys, I think it's very good for them because with sciences, one can do many things."

This is all part of the Rwandan government's plan to transform the economy by 2020. It hopes to do this in part by increasing the number of people with careers in STEM fields.

The World Bank says Rwanda is one of a small number of African countries leading the way in expanding STEM education.

A 2017 report that measured the ability of African governments to develop science and technology fields placed Rwanda third, behind Morocco and Tanzania. The report said Rwanda's efforts to expand STEM education include establishing a science ministry, creating research programs, partnering with private groups and awarding scholarships.

The Ministry of Education's budget increased nearly 10 percent from last year. Fourteen percent of its $280-million budget is for STEM projects. This includes developing "smart classrooms" with computers and internet connectivity and building a center for theoretical physics.

The Rwandan government wants to double the current budget for STEM education at the university level.

Jeannette Gahunga graduated from university three years ago with a degree in computer programming. Now she is a volunteer teacher at a public primary school in Kigali.

She teaches her students how to create interactive animations using a free programming software called Skratch.

Half of the students in her class are girls. Gahunga says she tries to support them, because mentorship is important to keeping girls on the STEM track.
"They're able to make innovation, and they are not shy as before, now they are really learning very hard. The girls in my class, they are being the same as boys. They are hardworking as others and they are following very well." 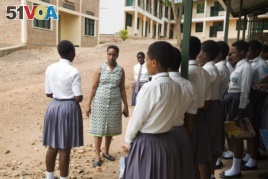 Josephine Kobusingye, an education activist, mentors a group of female science students. She says supporting them is crucial because many of them are facing dificult family situations.

But girls still face cultural barriers, says Josephine Kobusingye, an education activist. She takes part in a support group where female science students get together to talk about their professional goals.

"Culturally, African girls and women were the people to stay in the backdoors and never on the front line," she said.

Kobusingye added that another difficulty Rwandan women and girls deal with is the "after-effects of genocide."

However, she believes that with STEM, there is hope for them.

Are STEM subjects important in schools in your home? We want to hear from you. Write to us in the Comments Section or on 51VOA.COM.

boarding school - n. school where students can live during the school term

double - adj. made of two parts that are similar or exactly the same

interactive - adj. designed to respond to the actions, commands, etc., of a user

mentor - n. someone who teaches or gives help and advice to a less experienced and often younger person

programming - n. the act or job of creating computer programs

orphan - n. a child whose parents are dead

track - n. the course along which someone or something moves or proceeds

transform - v. to change (something) completely and usually in a good way