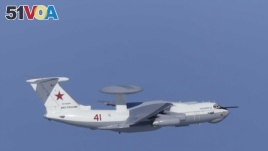 Defense officials in Seoul said the Russian plane left the area after about three minutes. But they said the plane later returned and violated the country's airspace again for four minutes. The officials said the South Korean fighter planes then fired more flares and warning shots.

South Korea said it was the first time a foreign military plane had violated its airspace since the end of the Korean War in 1953.

The commander of Russia's long-range air forces denied both the report that planes had violated South Korean airspace and the report of shots.

Russia's Defense Ministry said it does not recognize South Korea's claim to the air territory. The Chinese Foreign Ministry said the area was not territorial airspace and that all countries enjoy freedom of movement in it.

The airspace that South Korea says the Russian warplane violated is above a group of South Korean-held islands about halfway between South Korea and Japan. Japan also claims ownership of the islands.

Japan protested to South Korea for firing warning shots over Japanese airspace. It also protested to Russia for violating its airspace.

South Korea answered that it cannot accept the Japanese statement, repeating that the islands are South Korean territory.

Ashley Thompson adapted this story based on reports by The Associated Press and Reuters. Caty Weaver was the editor.

flare - n. a very bright light that is used to give a signal, to light up something, or to attract attention

long-range - adj. able to travel or be used over great distances