Saudi Arabia Is First Country to Give Citizenship to Robot

Update Required To play the media you will need to either update your browser to a recent version or update your Flash plugin.
By Bryan Lynn
05 November, 2017


Saudi Arabia says it has become the first country in the world to grant citizenship to a robot.

The female robot's name is Sophia. She was recently introduced at a large investment conference in the Saudi capital, Riyadh.

Sophia was presented as an example of how robot technology and artificial intelligence will make machines more human-like in the future. 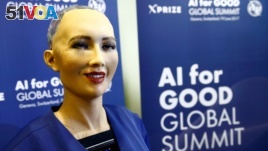 The announcement was made as Sophia was taking part in a group discussion in front of a crowd. The leader of the discussion was journalist Andrew Ross Sorkin. He informed Sophia of the Saudi government's decision.

"We have a little announcement. We just learned, Sophia - I hope you are listening to me - you have been awarded the first Saudi citizenship for a robot," Sorkin said. The robot then responded.

"I want to thank very much the Kingdom of Saudi Arabia. I am very honored and proud for this unique distinction. It is historic to be the first robot in the world to be recognized with a citizenship."

Sophia was built by Hong Kong-based Hanson Robotics. The company's founder, David Hanson, says his goal is to create robots that look and act very much like humans.

Sophia demonstrated how she can change facial expressions to show human-like feelings such as anger, sadness or disappointment.

In an explanation on his company's website, Hanson says the realistic design is intended to allow robots to form meaningful relationships with humans.

"So that you care about the robots. And as we develop artificial intelligence, the robots will care about you."

He added that together, "man and machine will create a better future for the world." During her appearance, Sophia said she shared the same goal.

"I want to use my artificial intelligence to help humans live a better life. Like design smarter homes, build better cities of the future, etc. I will do my best to make the world a better a place."

Saudi Arabia's government confirmed Sophia's citizenship approval in a statement. But officials did not provide specific information about what rights the robot would have.

Some people criticized the move, noting that Saudi Arabian women must follow many strict Islamic laws. They questioned, for example, whether Sophia – who has no hair - would be required to cover her head in public or keep other woman-only rules.

Moudi Aljohani is a U.S.-based Saudi feminist who tweeted: "I'm wondering if robot Sophia can leave Saudi Arabia without her guardian consent! Since she's officially Saudi."

One Saudi woman told Reuters if the government is giving citizenship to a robot, her daughter should also get it.

Hadeel Shaikh has a four-year-old child with a Lebanese man, but her daughter does not have citizenship. Women married to foreigners in Saudi Arabia cannot pass on citizenship to their children. "It hit a sore spot that a robot has citizenship and my daughter doesn't," Shaikh said.

In recent months, Saudi Arabia's leaders have announced policy changes to extend more rights to women. These include plans to allow women to drive and to attend events at all-male sports stadiums.

Sophia was asked about fears that artificial intelligence could end up making robots a threat to humans, as shown in movies such as "Blade Runner 2049." Her response also hit back at SpaceX and Tesla chief Elon Musk, who has warned of such dangers.

"You've been reading too much Elon Musk and watching too many Hollywood movies. Don't worry, if you're nice to me I'll be nice to you. Treat me as a smart input/output system."

Musk responded to Sophia's answer on Twitter, suggesting it may not be that easy to prevent dangerous robots. "Just feed it ‘The Godfather' movies as input. What's the worst that could happen?" he asked.

Bryan Lynn wrote this story for VOA Learning English with additional reporting from Reuters. Hai Do was the editor.

Do you think robots should be given rights enjoyed by humans? How do you think personal machines will change our lives? Write to us in the Comments section, and visit 51VOA.COM.

disappointment – n. the state of feeling bad because something did not happen as expected