Update Required To play the media you will need to either update your browser to a recent version or update your Flash plugin.
By Dan Novak
17 August 2021


As schools in the U.S. start to reopen for the autumn, coronavirus cases among children are rising with the new Delta variant.

But some state policymakers and their school district leaders disagree about how to safely reopen schools.

Last month, the U.S. Centers for Disease Control and Prevention (CDC) changed its guidance. It is now advising school districts to require masks for all students, teachers and workers. This includes people who have been fully vaccinated.

The country's two largest school districts, New York City and Los Angeles, are requiring its teachers to be vaccinated or face weekly COVID testing. California recently became the first state to require vaccines or weekly testing for all teachers and school workers.

But several Republican-led states have passed laws or signed executive orders that ban school districts from following the CDC guidance. Schools in Florida, Texas, Arizona, South Carolina, Utah, Iowa and Oklahoma are not permitted to require masks for teachers and students, Forbes reported.

In the United States, support for vaccines and mask-wearing is largely divided along political party lines. Monmouth University in New Jersey released a public opinion study this month measuring Americans' opinions about masking and vaccines. The study found that 85 percent of Democrats support new mask requirements, while 73 percent of Republicans oppose it.

Florida Governor Ron DeSantis banned schools in the state from requiring masks. He called mask-wearing a choice that parents should make and not the government. But some districts in the state are choosing not to listen to the governor's order.

In Florida's Leon County, which includes the state capital of Tallahassee, masks are being required in elementary and middle schools. The first day of class in the county was last week.

County school Superintendent Rocky Hanna made the announcement at a recent press conference.

"I did a lot of soul searching, a lot of thinking," he said. "If ... we lost a child to this virus, I can't just simply blame the governor of the state of Florida. I can't."

Sara Lee is a mother of two 10-year-old twins attending school in Leon County. She told VOA that their school required masks during the spring term, as well. She said wearing masks did not prevent her kids from learning or communicating, as Governor DeSantis has suggested. "I was relieved when our school board went against our governor," Lee said.

The Broward County, Florida, teachers union said Thursday that four of its teachers died of COVID-19 within two days. The county's school board had voted to require mask-wearing.

DeSantis has threatened not to pay school leaders who do not follow his order. Last week, Florida set records for the number of coronavirus hospitalizations for 12 straight days. 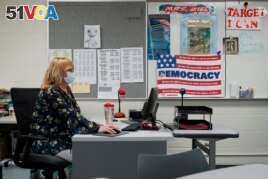 George Lyle has a stepson who attends high school in one of the Phoenix school districts that is ignoring the governor's order. His stepson is vaccinated. But he thinks that "in an environment right now where the Delta variant is spreading so rapidly, I think it would make sense," to require masks in schools, he told VOA.

Texas has also banned mask and vaccine mandates. Under Texas law, schools in the state do not even need to tell parents if there has been an outbreak of COVID-19 in a school.

The Dallas Independent School district started school August 16. It is ignoring the Texas governor's order and requiring masking. The district said on its website that the governor's order does not "establish reasonable and necessary safety rules" for its teachers, workers and students.

About 40 percent of new COVID-19 cases in the United States have come from Texas and Florida. Texas Governor Greg Abbot and Florida's DeSantis have both resisted efforts to prevent the spread of the virus since the pandemic started. Both are close allies of former President Donald Trump. Both are considering running in the 2024 presidential election.

Michael Steele is the former chairman of the Republican National Committee. He told The Washington Post that Abbot, DeSantis and other Republican governors are "making a political bet on the lives of the people they serve."

Few school districts are planning for a return to online or "hybrid" learning, though the number is growing. Hybrid learning includes a mix of both online and in-person classes.

The publication Education Week, found that 20 percent of school district leaders questioned said they will have hybrid models. That is up from 10 percent a month earlier. Less than one percent of school leaders say they are planning for full-time remote learning.

Lee, the parent in Florida, said her young children struggled at times while learning remotely. She said she hopes the masks will help prevent an outbreak.

"We've learned that it's probably better for them to be in school," Lee said.

She added, "It's interesting to me that last year in this time we were remote learning, and now (the virus is) worse and it affects younger kids more, so we are sending them to school.

"I'm just worried about the spread."

district — n. an area or section of a country, city, or town

soul-searching — n. a group of people who manage or direct a company or organization

relieved — adj. a group of people who manage or direct a company or organization

board — n. a group of people who manage or direct a company or organization

stepson — n. your wife's or husband's son by a past marriage or relationship

rapid — adj. a group of people who manage or direct a company or organization

outbreak — n. a sudden start or increase of fighting or disease

remote — n. connected to a computer system from another place