Update Required To play the media you will need to either update your browser to a recent version or update your Flash plugin.
By Bryan Lynn
29 March 2020


Scientists have studied an ancient fish that, they say, shows the early origins of the bone structures found in the human hand.

The discovery was made by researchers who examined a nearly complete fossil of a fish that lived about 380 million years ago. The fish, called Elpistostege watsoni, is believed to have lived in waters in what is now eastern Canada.

The researchers say their findings provide new information about the way fish began to develop into vertebrates that could survive on land. The team of scientists from Australia and Canada reported their research in a study published in Nature. 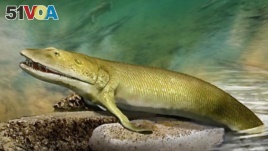 An artist's reconstruction of the extinct fish Elpistostege watsoni, which lived about 380 million years ago in what is now Quebec, Canada, is seen in this illustration released to Reuters on March 18, 2020. (Katrina Kenny/Handout via REUTERS)

Inside the top of Elpistostege's front fins - called pectoral fins - were small bones appearing in several separate digits: an early form of fingers. These digits would have given the fish's fin the strength to hold its weight and to move on land.

Richard Cloutier of Canada's Université du Québec à Rimouski is a paleontologist who helped lead the research. He told Reuters news agency the discovery shows clear links between the development of Elpistostege and human evolution.

"By looking at Elpistostege, it is important to realize that we, as human beings, are coming from a long line of evolution, that every part of our body, like our fingers, has a long evolutionary history," Cloutier said.

He added that such development was not only important for Homo sapiens – the species of human that exists today – but for all living organisms.

The four-legged land animals that evolved from fish like Elpistostege are called tetrapods, a group that covers amphibians, reptiles, birds and mammals, including humans. The digits of the thousands of living species of tetrapods all share the same basic structures that scientists found in Elpistostege.

The researchers used computerized image technology to examine the 1.6 meter-long fossil. The results showed upper and lower parts of a complete pectoral fin for the first time in any Elpistostege fish, the team reported.

The process also showed the formation of wrist bones and divided digits. The digits were still contained within the fin, however, so they could not move independently like fingers, the researchers said.

Elpistostege's body was similar to a crocodile and the animal lived mainly in water. It had a flat head, with eyes at the top and many teeth around the jaw area. Its body was thin, with well-developed fins.

It is unclear whether Elpistostege sometimes moved on land. But the structure of its fins would have made this possible, said study co-writer John Long of Flinders University in Adelaide, Australia.

"This finding pushes back the origin of digits in vertebrates to the fish level," Long said in a statement. "And tells us that the patterning for the vertebrate hand was first developed deep in evolution, just before fishes left the water."

Elpistostege was known only from fossil parts until the complete set of bones was found in Canada's Miguasha National Park in 2010.

Bryan Lynn wrote this story for VOA Learning English, based on reports from Reuters, Nature and Flinders University. Mario Ritter, Jr. was the editor.

origin – n. where something begins or comes from

vertebrate – n. having a spine

fin – n. a thin part that sticks out from a fish's body to help with movement

evolution – n. the way in which living things gradually change and develop over millions of years

species – n. a set of plants or animals in which the members have similar characteristics to each other and can breed with each other

amphibian – n. an animal that lives both on land and in water

pattern – n. a particular way something is done, is organized or happens

jaw –n. the lower bone of the head where teeth grow