Update Required To play the media you will need to either update your browser to a recent version or update your Flash plugin.
By Alice Bryant
24 February, 2017


Scientists in Mexico say they may have found a way to cut production of methane, a gas linked to rising temperatures on the Earth's surface.

The scientists say their method may help reduce the methane released by cows, one of the main producers of the gas.

When talking about global warming, many people think of carbon dioxide, another heat-trapping gas. Studies have shown that large amounts of carbon dioxide in the atmosphere reflect heat back to earth, causing climate changes.

Methane is an even more powerful heat-trapping gas. Cows are known to produce high levels of methane when they eat and process food. Farm animals are responsible for 44 percent of all human-caused methane, according to the Reuters news service.

Researchers at the Autonomous University of the State of Mexico are studying how a cow's diet affects the production of methane. The researchers are using a specially designed machine to measure the effect.

Stefanny Hernandez is an assistant researcher at the university. She told VOA that, "approximately 95 percent of methane that is emitted by cattle is from breathing."

The scientists use the machine to try to capture the animal's breathing to examine the methane released, she explained. 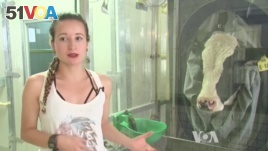 Stefanny Hernandez is an assistant researcher for this study on cows' diets and methane.

Most of the gas is released when cows belch. The digestive bacteria in a cow's stomach causes the animal to expel the gas through its mouth.

There are an estimated 1.3 to 1.5 billion cows in the world. Each animal releases as much as 120 kilograms of methane per year.

The U.S. Environmental Protection Agency reports that, when measured in pounds, the effect of methane on climate change is more than 25 times greater than carbon dioxide over a 100-year period.

In addition, a 2006 United Nations report found that raising cattle produces more greenhouse gases than cars and trucks combined. This includes not just gases released by the cattle, but the effect of related activities, such as clearing forests to raise the animals.

Octavio Castelán is the head of the university's cattle and environment laboratory. He told VOA, "If we can reduce methane emissions, then we can rapidly reduce the effect on climate change."

As it is difficult to capture the gas released by cows for use as energy, one way to lessen its release is to change their diet.

Scientists in some countries are looking for ways to decrease cow methane. But, Castelán explained, while they are trying different plants and chemical compounds, those products would be too costly and difficult to bring to Mexico.

The Mexican researchers have found two animal food sources offering promising results: leaves from the leucaena tree and the flowers of the cosmos plant. Both plants grow in warm climates.

The researchers found that cows who ate grass mixed with the leucaena leaves belched about 36 percent less methane than a diet of grass alone. The cosmos flower reduced these emissions by 26 percent when mixed with the animal's feed.

In addition, the two plants do not have a harmful effect on milk and meat production. In fact, the researchers found that leuceana leaves improve the quality of cow milk. This can give Mexican farmers more reason to grow the plants and change their cattle's diet.

George Putic reported this story for VOANews. Alice Bryant adapted it for Learning English with additional information from scientific and news sources. George Grow was the editor.

global - adj. of or related to the world

emit - v. to send gases, light, or energy out into the air

cattle - n. cows, bulls, or steers that are kept on a farm or ranch for meat or milk

belch - v. to let out air from the stomach through the mouth very loudly