Update Required To play the media you will need to either update your browser to a recent version or update your Flash plugin.
By Caty Weaver
02 July 2020


Scientists say a relative of modern wombats, about the size of a black bear, lived in central Australia around 25 million years ago.

Fossils of the creature's head and other bones were discovered in 1973, under Lake Pinpa, a dry, salt lake in South Australia state. The fossils were housed in the American Museum of Natural History in New York City and went unstudied for years. 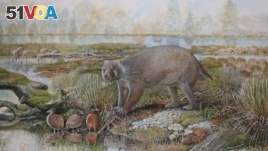 The marsupial Mukupirna nambensis, a plant-eating mammal about the size of a black bear that lived roughly 25 million years ago in Australia is seen in an artist's impression released on June 25, 2020. (Peter Schouten/Handout via REUTERS)

Robin Beck, a professor at the University of Salford in Britain, led the research, which appeared in the publication Scientific Reports.

"It may have looked a bit wombat-like, but with a smaller head," Beck said. He said the animals also had longer tails and strong legs.

The researchers named the plant-eating mammal Mukupirna nambensis. The name means big bones in the local Aboriginal language. The shape of the creature's hands and forelimbs suggest it was a skillful and powerful digger, scientists say.

Mukupirna is one of the earliest-known large-bodied Australian marsupials, the report said. Its discovery helps explain the development of a marsupial group called vombatiforms. The group includes wombats as well as koalas.

Marsupials are mammals that give birth to less developed young that are carried and fed in a pouch on the mother's body. They were the common mammals found across Australia following the end of dinosaurs. Other mammals, like cats, dogs, elephants, apes, horses, developed more commonly on the other continents.

Mukupirna was not a direct ancestor of wombats but a close relative. At about 150 kilograms, it was about five times the size of modern wombats.

Beck said in a news release Mukupirna "probably lived in an open forest environment without grasses, and developed teeth that would have allowed it to feed on sedges, roots, and tubers that it could have dug up with its powerful front legs."

"It is a very unusual animal," he added. In fact, researchers have identified Mukupirna as its own animal family.

Mike Archer is a professor at the University of New South Wales, Australia. He helped write the report on the Mukupirna. He was also among the scientists that discovered the bones almost 50 years ago. He said the find was extremely lucky.

Normally, Lake Pinpa is covered with sands from nearby hills. "But because of rare environmental conditions" before the team arrived, he said, the fossil-rich surface was on full show.

mammal -n. a type of animal that feeds milk to its young and that usually has hair or fur covering most of its skin

forelimb -n. an arm, fin, wing, or leg that is located toward the front of the body

pouch -n. a pocket of skin on the stomachs of some female animals (such as kangaroos and koalas) that is used to carry young

allow -v. to permit; to let

sedge -n. a plant like grass that grows in wet ground or near water