Update Required To play the media you will need to either update your browser to a recent version or update your Flash plugin.
By Bryan Lynn
21 July, 2019


While no life has yet been discovered on Mars, humans have long considered the possibility of someday living on the Red Planet. The problem with this idea is that Mars experiences extreme conditions that would make it impossible for humans to survive.

Two of the most extreme conditions are very low temperatures and high levels of radiation from the sun. Both of these make Mars currently unlivable for humans, plants and other forms of life.

Yet discussions continue about sending people to Mars, with some even proposing a human colonization of the planet in the future.

The American space agency NASA has plans to someday put humans on Mars. NASA's goal is to first return humans to the Moon by 2024. The agency then plans to carry out several Moon missions in preparation for sending astronauts to Mars by the 2030s. 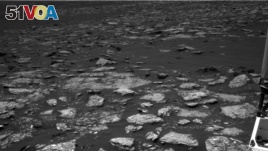 This Dec. 2, 2016 image taken by NASA's Curiosity rover shows rocky ground on the lower flank of Mount Sharp, a mountain on Mars.

A new study proposes a plan that may make it possible for humans not only to visit Mars, but also live there. The study involved researchers from America's Harvard University, NASA's Jet Propulsion Laboratory (JPL) and the University of Edinburgh in Scotland.

The study, published in Nature Astronomy, explains how a material called aerogel might protect living things on Mars. NASA has described aerogel as "the lightest solid material known." Most aerogel is made from silica, a substance found in glass. It is sometimes called "frozen smoke" because of its weight and cloud-like appearance.

Aerogel, made with 99 percent air, is extremely light. The material also permits light to pass through while blocking harmful ultraviolet light radiation. Aerogel has also been used by NASA as an effective insulator to prevent its Mars vehicles from freezing.

The researchers propose putting shields with a two- to three-centimeter layer of aerogel in different areas above the surface of Mars.

Experiments involved a layer of aerogel and lights used to simulate Martian sunlight. Researchers reported the temperature on the simulated Mars surface was raised to 65 degrees Celsius. This temperature would be enough to melt ice on Mars.

The study suggests that a layer of aerogel in areas above Mars would make it possible for enough light to reach the surface to permit photosynthesis. This is the process by which plants use energy from the sun to turn water and carbon dioxide into food.

If successful, this process could give humans the ability to grow food on Mars. This would help reduce the need for supply shipments requiring costly equipment and fuel. The aerogel could also protect humans from harmful ultraviolet radiation.

Laura Kerber is a research scientist at NASA's JPL. She helped lead the experiments. She said in a statement that, after Earth, Mars "is the most habitable planet" in our solar system. She added, "But it remains a hostile world for many kinds of life." The aerogel could create "small islands of habitability" for humans and other living things, Kerber said.

Robin Wordsworth is a professor of environmental science and engineering at Harvard University. He said the aerogel could provide a relatively easy solution to help make Mars livable. "Spread across a large enough area, you wouldn't need any other technology or physics, you would just need a layer of this stuff on the surface, and underneath you would have permanent liquid water," Wordsworth said.

The material could also be used to build habitation living spaces or self-contained biospheres on Mars.

The researchers plan next to take their experiment outside the laboratory and into places that have Mars-like climates on Earth. Two possible areas include the Atacama Desert in Chile or Antarctica's McMurdo Dry Valleys. Like Mars, these two places experience very cold temperatures and extremely dry air.

Bryan Lynn wrote this story for VOA Learning English, based on reports from NASA, Nature Astronomy, Harvard University and other online sources. Ashley Thompson the editor.

insulator – n. a material or covering that prevents electricity, heat or sound from passing through

simulate – v. create conditions or processes similar to something that exists

ultraviolet – adj. used to describe light that cannot be seen and that has shorter wavelengths than violet light

habitable – adj. able to be lived in

passive – adj. not acting to influence or change a situation

maintenance – n. the process of keeping or continuing something

biosphere – n. the part of the Earth's environment where life exists