Update Required To play the media you will need to either update your browser to a recent version or update your Flash plugin.
By Dr. Jill Robbins
29 November, 2017


Scientists are using robotic devices to study the health of waters in and around Venice, Italy.

The robots are designed to act like fish, other underwater creatures and plants.

The scientists are working with several universities and research centers as part of a group called subCULTron.

The European Union gives money to the project as part of its Horizon 2020 program. The aim of Horizon 2020 is to "take great ideas from the lab to the market" and support world-class science and innovation in Europe.

Francesco Barbariol is with the Institute for Marine Sciences in Venice. He says the goal is to use the artificial intelligence of the robots to help humans understand what is happening under the water of the Venice lagoon.

"SubCULTron is a collective artificial intelligence project whose aim is to create the biggest shoal of robot fish in the world. The aim of the project is to improve knowledge of the seabed, and, from a technological point of view, to try to transfer human abilities to hi-tech items."

As part of the project, the scientists created three kinds of robots: the aMussel, the aFish and the aPad.

An aMussel sits on the bottom of the sea and gathers information about the plants, bacteria, and animals around it. It also collects information from the other robots and helps them communicate with each other.

An aPad floats on top of the water like a lily pad. It communicates with people about the ships on the water and gets information from satellites orbiting the Earth. 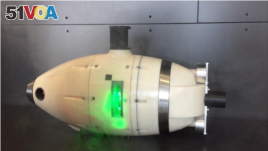 aFish made by subCULTron Project

The aFish moves around between the aPads and aMussels. It explores the water and shares information with the aMussels and aPads.

Together, the robots form a swarm, like a group of bees going about their jobs, or birds moving together as one in the sky.

As the robots work together, they appear to be learning to organize themselves in the same way living things do.

One problem the researchers had in the beginning was how the robots would communicate with each other. Wi-Fi and GPS equipment do not work underwater. Instead, the robots can use sonar and an electric field.

Thomas Schmickl is a biologist at the University of Graz in Austria. He says the robots cannot see in the water because it is not clear. So, they act like some fish in South America and Africa. The electric field the robots send out lets them sense what is near them and react to it.

Another problem was charging batteries. The robots come up to the water's surface and can charge by staying near a boat or a power station to charge without any electrical cables.

The water is not clear, but it is getting better.

Fabrizio Bernardi Aubry is with the Institute for Marine Sciences. He says, "The health status of the lagoon is pretty good. There are no industrial polluters, and the city now has a modern sewer system. It's not like before when all the sewers flushed directly in the water."

Other projects in Europe use robots to watch water quality.

The robots in Venice will continue their work until 2019. The subCULTron project hopes they develop into "an artificial society underneath the water-surface" that serves "a human society above the water."

Dr. Jill Robbins wrote this story for VOA Learning English. Her story was based on reports from VOANews, CBS News and other sources. George Grow was the editor.

What do you think of these robot fish? We want to hear from you. Write to us in the Comments Section.

lagoon - n. an area of sea water that is separated from the ocean by a reef or sandbar

shoal - n. a large group or number of fish

lily pad - n. a large, floating leaf of a plant (called a water lily) that grows in the water of a pond or pool

swarm - n. a very large number of things moving together

society - n. the people of a particular country, area, time, etc., thought of especially as an organized community

innovation – n. an intention; a new method or device

sewer – n. a pipe or underground system used to carry away waste products and liquids