Update Required To play the media you will need to either update your browser to a recent version or update your Flash plugin.
By Bruce Alpert
11 March, 2016


A captive whale in a water park in Florida that killed his trainer six years ago is reportedly in grave health.

The killer whale, Tilikum, appears to have a serious bacterial infection.

That information comes from SeaWorld, which has housed the 12,000-pound (5,443 kilogram) whale at its Orlando, Florida, park for the past 23 years. 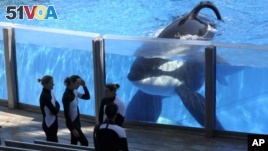 In 2010, the whale drew international attention when he killed his trainer, Dawn Brancheau, age 40.

The whale has been linked to two other deaths. In 1991, at a Canadian water park, Tilikum was one of three killer whales who dragged trainer Keltie Byrne, 21, under water, according to news reports. In 1999, at SeaWorld Orlando, Daniel Dukes, 27, was found dead over Tilikum's back. Police said he snuck into the whale tank, news reports said.

On Tilikum's current condition, this is what SeaWorld said: "Our teams are treating him with care and medication for what we believe is a bacterial infection in his lungs. However, the suspected bacteria is very resistant to treatment and a cure for his illness has not been found."

"I wish I could say I was tremendously optimistic about Tilikum and his future, but he has a disease which is chronic and progressive and at some point might cause his death," Gearhart said.

The SeaWorld blog estimates Tilikum is 35 years old. That is near "the high end" of the average life expectancy for male killer whales, SeaWorld said.

After the death of Tilikum's trainer six years ago, SeaWorld and Tilikum were subject of a 2013 documentary, "Blackfish." It featured interviews with former trainers and whale experts who said some killer whales become depressed and aggressive in captivity.

SeaWorld has been under pressure to stop whale shows from groups such as People for the Ethical Treatment of Animals (PETA). The male killer whales are also known as orcas.

SeaWorld announced last year that, starting in 2017, whale shows in its San Diego, California, park will focus "more on the species' natural behaviors." It said the new shows will give information about how people can "make a difference for orcas in the wild."

SeaWorld did not say what changes, if any, would be made for whale shows in its other two parks, in Orlando and San Antonio, Texas.

PETA said SeaWorld immediately should move its whales to sanctuaries, "where they could enjoy a more natural life."

lungs – n. organs that people and animals use to breathe air

resistant – adj. not affected or harmed by something

lethargic – adj. feeling a lack of energy or a lack of interest in doing things

veterinarian – n. a person who is trained to give medical care and treatment to animals

expectancy – n. a feeling that something is going to happen

sanctuary – n. a place where animals can be protected in a natural setting