Update Required To play the media you will need to either update your browser to a recent version or update your Flash plugin.
By Hai Do
11 December, 2017


A small bomb exploded near an underground train station in New York's Times Square on Monday. The explosion during rush hour injured the suspected bomber and three other people.

All four were sent to the hospital for treatment. Police described the incident as an attempted terror attack.

The explosion happened in an underground passageway that connects Times Square station on 42nd Street to a station under the Port Authority Bus Terminal. Many people were in the passageway when the explosion caused it to fill with smoke. 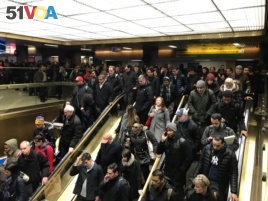 The suspect was identified as 27-year-old Akayed Ullah.

New York officials said the Islamic State terrorist group inspired the suspect but that he did not have direct contact with the group. Officials said he lives in Brooklyn and possibly was born in Bangladesh.

The New York Post newspaper published a photo of the man lying on the ground with his shirt torn off and burn marks on his body. The photograph also shows police officers holding the man's hands behind his back.

The explosion at 7:30 a.m. closed the nation's busiest bus station, eight underground train lines and all the streets around Times Square.

John Miles was waiting for a bus to Massachusetts. He also did not hear the explosion, but saw police react.

"I didn't know what was going on. Officers were running around. I was freaking out," he said. There was an announcement that people should leave the area.

On October 31, another act of terror killed eight people in New York City. The suspect in that attack drove a truck down a crowded bicycle path.

Officials said the area of Monday's explosion would be re-opened by the nighttime rush hour.

Hai Do adapted this story for Learning English based on AP news reports. Caty Weaver was the editor.

rush hour - n. a time of day early in the morning or late in the afternoon when many people are traveling to work or to get home after work

perpetrator - n. a person who plans to do something illegal or wrong

achieve - v. to reach a goal

inspire - v. make someone want to do something

freaking - adj. informal, use to make a statement more forceful