Smoking Rates Around the World

Update Required To play the media you will need to either update your browser to a recent version or update your Flash plugin.
By Anna Matteo
26 February, 2018

"Tobacco is the only legal drug that kills many of its users when used exactly as intended by manufacturers."

That is the first sentence of the World Health Organization's 2015 global report on smoking trends around the world.

Smoking around the world

On its website, the World Health Organization says that in 2015, over 1.1 billion people smoked tobacco. The organization also states that while tobacco use is decreasing in many countries, it "appears to be increasing in WHO Eastern Mediterranean Region and the African Region."

The WHO lists on its websites these three important facts about tobacco use:

In 2016, the World Bank report "The global state of smoking in 5 charts," said that from 2000 to 2015 smoking rates went up in 27 countries. The report said most of them were low and middle-income countries.

The report added that in Indonesia, the rate went up by almost 30 percent. It said more than 70 million people smoke in Indonesia.

The WHO says there is a "tobacco crisis." Experts say that if we do nothing to change this trend, the number of people who die from tobacco each year worldwide will rise to 8 million by 2030.

The article also states that in every country, the smoking rates for men are much higher than those for women. 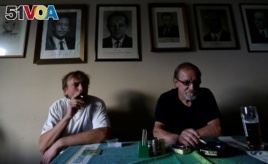 Men smoke cigarettes in a pub on a last day before a smoking ban comes into effect in Prague, Czech Republic, May 30, 2017.

In its yearly report, the ALA says smoking rates among adults and teens are at historic lows. It says a little more than 15.5 percent of American adults, and eight percent of high school students, smoke cigarettes.

Connie Graffunder is director of the CDC's Office on Smoking and Health. She says "more people are quitting, and those who continue to smoke are smoking less."

However, CDC research also shows that almost 38 million American adults still smoke. And the American Lung Association says tobacco use and exposure to second-hand smoke affects some groups and areas of the United States more than others.

Thomas Carr is the Director of National Policy for the American Lung Association and writer of its 2018 report, The State of Tobacco Control.

Carr says smoking rates are close to 30 percent or higher among poor people, less educated people, Native Americans and some other ethnic groups.

Carr says that "the tobacco industry advertises more to some of these groups." He adds that often there are more tobacco products available in stores in low-income areas.

Teenagers are more likely to smoke if their friends or parents smoke. Studies show that most people who smoke start before they are 18. Some start as young as age 11, according to The Campaign for Tobacco-Free Kids.

Carr calls it a childhood disease. "It starts in your teens and then once you're hooked, you can't get off of it."

What can countries do to stop people from smoking?

The American Lung Association advocates for the U.S. government to make buying tobacco products for those under age 21 illegal. The group says this would lead to a drop in the number of young smokers.

The ALA says if middle and high school students cannot get cigarettes, they are less likely to start smoking. To date, five states in the U.S. -- California, Oregon, Maine, Hawaii and New Jersey -- have raised the age to 21.

The WHO says that there are other things countries can do to limit tobacco use.

Experts at the WHO experts say studies show that anti-tobacco advertisements can reduce the number of children who smoke. This is especially true if the advertising uses picture warnings on the packaging.

The WHO adds that bans on tobacco advertising can reduce the use of tobacco products. Higher taxes can also lower the number of people who use tobacco. This is especially true with young and poor people.

Anna Matteo wrote this story for Learning English with additional reporting from Carol Pearson. Caty Weaver was the editor.

intend – v. to have in mind as a purpose or goal

manufacturer – n. a company that makes a product

second-hand smoke – n. tobacco smoke that is exhaled by smokers or is given off by burning tobacco and is inhaled by persons nearby

advertise – v. to make the public aware of something (such as a product) that is being sold

hooked – v. addicted to a drug : usually used with "on" : She is hooked on cigarettes.

advocate – v. to support or argue for (a cause, policy, etc.)