Update Required To play the media you will need to either update your browser to a recent version or update your Flash plugin.
By Bryan Lynn
20 July, 2019

Solar lighting is bringing changes to many areas, including the village of Balla, near the Himalayas in the northern state of Himachal Pradesh. 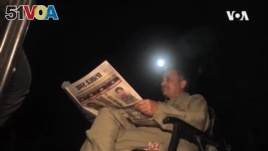 In the past, many villagers never left homes after the sun went down. The reason: the streets usually went completely dark at night.

"We used to be scared. This is a lonely area and wild animals used to come," villager Umesh Chandra Awasthi told VOA.

But life changed a lot in this rural community after solar-powered lamps were set up on Balla's streets. "Now we have a free pass to go outdoors after dark. Animals, even pigs that wandered into our gardens, don't trouble us any longer," Awasthi said.

The addition of the lamps is part of a government program to expand solar energy in rural areas. Most people living in rural and mountainous areas have limited access to the main electrical system.

The program was launched three years ago with the goal of adding tens of thousands of solar-powered street lights. Today the lamps are found in hundreds of villages in the northern Himalayas, as well as poor, underdeveloped states like Bihar and Jharkhand in India's east.

Nationwide about 240 million people lack access to dependable power supplies because of operational issues, inability to pay or other reasons.

Government incentives have made solar energy more appealing for local communities because of its low cost. The government pays 90 percent of the cost of the solar lights, which cost $350 a piece. People in the villages make up the difference.

Surender Dhiman is a project officer for Himachal Pradesh's energy agency, which oversees the program. He says the lamps have become popular in villages that did not have street lighting before. He added that people are now going out after dark because they feel safer.

Solar lights are also popular because once the lights are paid for, there are no other costs for villagers or officials to worry about.

The lighting also helps in India's mountains, where power outages are common.

"Due to frequent storms, conventional power lines often go down, and sometimes lights are out for long stretches while repair work carries on," villager Ajay Awasthi said. "Now even during outages, the solar lights keep the area lit."

With a newfound sense of security, women are now going out after dark and some mothers are letting their children go, too.

"Now my children can play outside in the courtyard," said Shivani Sharma, a mother of a young son and daughter. "If they have examinations and there is no light, they can even study outside," she added.

The solar street lighting is proving so popular that many people now want solar equipment where they live to light up their homes. The villagers say such equipment could especially help needy families who often keep lights off at home to save money.

It remains to be seen whether government-supported housetop solar collectors will someday become a reality in Balla. For now, the villagers are happy to enjoy a new kind of freedom created by light.

solar – adj. related to the sun

access – n. the right or availability to do or see something

incentive – n. something that influences someone to act in a particular way

conventional – adj. based on what is generally done or believed

courtyard – n. an area that is mostly enclosed by the walls of a large building or several buildings