Update Required To play the media you will need to either update your browser to a recent version or update your Flash plugin.
By John Smith
18 March, 2017


The parliament of South Africa may soon consider a law that would permit limited trade and export of rhinoceros horn for personal use.

The government proposed the law earlier this year. It accepted comments about the measure for 30 days. That period ended on March 10.

The measure has some supporters. But animal rights groups strongly oppose it. 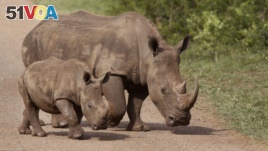 Rhinos walk in the Hluhluwe-Imfolozi game reserve in South Africa, Dec. 20, 2015. The country is considering partially legalizing the trade in rhino horn.

The government wants to permit domestic trade in rhino horn and individual exports of two rhino horns at one time. The horns must be for personal use only. There would be strict controls on the trade.

South Africa's Department of Environmental Affairs said records would be kept about the buyers and sellers of rhino horns. Officials would keep genetic information about each horn.

Domestic trade in rhino horn was banned in South Africa in 2009.

But, two independent rhino breeders won a court case challenging the ban in 2015. The government appealed the ruling but it was not successful. So the Department of Environmental Affairs proposed the new law.

Independent rhino breeders who sought to cancel the ban are happy about the proposed law. Pelham Jones is the chairman of the Private Rhino Owners Association. He said the trade would be supervised by wildlife officials and would not harm living rhinos.

"The benefit of domestic trade is that it will allow now a partial supply of rhino horn from existing stockpiles, no injury to existing live animals whatsoever, to be traded in South Africa, to be exported with a CITES permit."

But opponents say all trade in rhino horn should be banned. They believe even limited trade will cause criminal groups to become involved. Jo Shaw is the manager of the World Wildlife Fund's South Africa Rhino Program.

"We don't believe that the necessary control mechanisms are currently in place at an international, national or provincial level to enable law enforcement and permitting staff to be able to regulate this legal domestic trade alongside the existing levels of illegal trade in horn."

International trade in rhino horn has been banned since 1977.

Jones says there is no proof that the international ban has protected rhinos. He says legal trade will help the animals.

He argues that many reserves where rhinos are protected have sold their rhino populations because of security costs. Jones notes that the sales will help pay for some of the costs of keeping and protecting rhinos.

A rhino horn can sell for as much as $23,000. The South African government reports that every year the country loses about 1,000 rhinos to poachers.

These criminals sell the horns to people in Asian countries where the horns are used to treat some medical problems. However there is no scientific evidence that rhino horns can help someone with such problems.

domestic – adj. of, relating to or made in your own country

stockpile – n. a large supply of something that is kept for future use

CITES permit – n. permission given under the Convention on International Trade in Endangered Species of Wild Fauna and Flora, an international agreement between governments; its goal is to ensure that international trade in wild animals and plants does not threaten their survival.

mechanism – n. a process or system that is used to produce a particular result

enable – n. to make (someone or something) able to do or to be something

regulate – v. to make rules or laws that control (something)

reserve – n. an area of land where animals and plants are given special protection

poacher – n. someone who hunts illegally