Update Required To play the media you will need to either update your browser to a recent version or update your Flash plugin.
By Mario Ritter
14 February, 2018


South African President Jacob Zuma has resigned, in his words, "with immediate effect."

He made the announcement in a 30-minute speech on national television late Wednesday.

The 75-year-old Zuma had been under strong pressure from his ruling African National Congress, or ANC, to leave office before the end of his term.

Zuma said he would resign although he disagreed with the instructions of the ANC to leave office immediately. In his speech, he said the party should observe the constitution in its efforts to remove him. 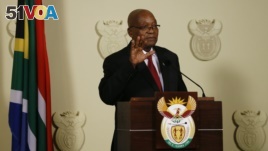 The party was set to hold a "no confidence" vote on Thursday to remove him from office.

Zuma has faced eight no confidence votes and survived each one.

However, years of corruption accusations had left the South African leader with fewer and fewer allies.

The ANC also has seen its support drop as the accusations of corruption continued.

Earlier Wednesday, Zuma gave an interview on South Africa's state broadcaster SABC. In it, he said party leaders had not given him a clear reason for why he should resign.

Zuma's earlier position had been that he wanted to remain in office for several additional months.

After the announcement, the ANC expressed gratitude for Zuma's "loyal service." The party is calling on its members to support Deputy President Cyril Ramaphosa.

Reports say Ramaphosa is expected to be elected in a parliamentary vote and sworn in soon.

Ramaphosa replaced Zuma as president of the ANC in December.

Mario Ritter adapted it for VOA Learning English from AP Reuters and VOA sources. Hai Do was the editor.