South Korea Says US in Close Communications Over North

Update Required To play the media you will need to either update your browser to a recent version or update your Flash plugin.
By Mario Ritter
17 August, 2017

Moon said, "The United States and President Trump have declared and promised that whatever military action they would like to take, they will fully discuss it with us and get our consent."

"South Korea and the U.S. are in full communication and discussions," he added.

During a televised news conference, Moon also promised to prevent another military conflict on the Korean Peninsula. The event marked his first 100 days in office. 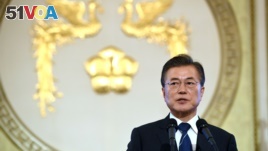 Moon has called for reducing tensions through talks and engagement. This has been different from the U.S. president's efforts to put "maximum pressure" on North Korea for its missile tests and nuclear program.

However, Moon said North Korea should stop the development of a fully operational Intercontinental Ballistic Missile (ICBM). Such a development, Moon said, would cross a "red line" and raise the risk of military conflict.

Moon said "President Trump is trying to pressure North Korea by showing firm determination." But he said he considered economic pressure was the main way to persuade North Korea to take part in nuclear talks.

Trump called the postponement a "wise and well-reasoned decision" in a tweet on the social network Twitter.

North Korea's threat was in reaction to new United Nations Security Council restrictions. The goal of the measures is to ban about $1 billion worth of North Korean exports including coal, iron ore and seafood. The U.S. and other countries have accused North Korea of using export income to fund its banned weapons programs.

Moon's news conference Wednesday came less than one week before the beginning of yearly military exercises between South Korean and U.S. troops.

During a visit to Beijing Thursday, the Chairman of the U.S. Joint Cheifs of Staff, General Joseph Dunford said there are no plans to reduce the size of the exercises.

And U.S. Vice President Mike Pence again stated that "all options" toward North Korea remain for consideration during his visit to South America.

On Monday, China announced it would place restrictions on North Korean imports following the U.N. Security Council measures. China has urged North Korea not to carry out missile or nuclear tests that are banned by the Council. It also has said stopping regular South Korea-U.S. military exercises would ease tensions in the area.

Brian Padden and Richard Green reported this story for VOA News. Mario Ritter adapted it for VOA Learning English. Hai Do was the editor.

maximum –adj. the most

determination –n. to continue to do something in order to reach a difficult goal

persuade –v. to convince someone to do something

options –n. things that can be chosen between, opportunities to choose