Update Required To play the media you will need to either update your browser to a recent version or update your Flash plugin.
By Bryan Lynn
06 June 2020


In South Korea, some companies are using robots to help fight the spread of the coronavirus.

Mobile phone company SK Telecom put a robot on the first floor of its Seoul headquarters to observe people and perform cleaning operations.

The company says the robot automatically records the body temperature of visitors and can warn officials when a person's temperature is too high. 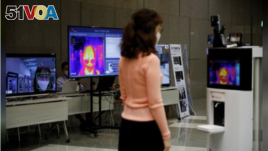 A self-driving robot checks the body temperature of an employee during a demonstration at the headquarters of SK Telecom in Seoul, South Korea, on May 26, 2020. (REUTERS/Kim Hong-Ji)

The machine can also disinfect the floor and release small amounts of fluid for people to clean their hands.

The robot – which SK Telecom helped develop – uses machine learning technology to observe when people form groups. If individuals are too close to each other, the robot issues a warning: "Please take part in social distancing."

The company says the robot can also identify people who are not wearing face coverings.

South Korean companies have long used robotics to carry out manufacturing and cleaning operations. But the coronavirus crisis has caused an increasing number of companies to use the technology as a way to slow the spread of the virus.

South Korea has largely been able to contain the spread of the coronavirus, which has infected about 11,500 people and killed more than 270. The government is now attempting to move away from intensive social distancing to what officials have described as "distancing in daily life."

"The robot helps minimize people-to-people contact and reduce time that's taken for temperature checks at the entrance," said Ra Kyhong-hwan, one of the developers for SK Telecom. The developer spoke to the Reuters news agency.

The robot is able to use ultraviolet lights and cleaning equipment to disinfect a 33-square-meter area in about 10 minutes, the company says.

Developers of the machine said they added a privacy tool that prevents individual faces from being recorded.

Lim Yeon-june is an employee of SK Telecom. She said she did not know what to think when she first saw the robot in action. "But I realize it can raise awareness about distancing and also improves accuracy in temperature checks," she told Reuters.

For example, a robot at an eatery in the central city of Daejeon can take orders, make drinks and serve customers.

South Korea's largest movie theater company uses robots to assist moviegoers in buying tickets and food, as well as guiding them to their seats.

Last month, South Korea's top food delivery service, Woowa Brothers, began a test project with self-driving robots that can move freely between floors of buildings. The delivery robots are designed to pick up food orders from restaurants in the area and take them directly to people in homes or offices.

An official told Reuters that the company started testing the delivery robots last year. But there now could be a greater need for the machines "as more people find robots to be useful amid the coronavirus outbreak and social distancing," the official said.

Reuters reported on this story. Bryan Lynn adapted the report for VOA Learning English. Hai Do was the editor.

disinfect – v. to clean something with a chemical to destroy bacteria

minimize – v. reduce the amount of something

customer – n. a person or organization that buys goods or services from a shop or business

delivery – n. the taking of things from one place to another

outbreak – n. the sudden arrival of a contagious disease