Space Tourism and Business Looking Up

Update Required To play the media you will need to either update your browser to a recent version or update your Flash plugin.
By Anne Ball
07 March, 2017


It was a surprising announcement: SpaceX, a private company, said it will fly two people to the moon next year. This has not been attempted since NASA's Apollo moon landings about 45 years ago.

The news came from SpaceX founder and chief executive officer, Elon Musk. He is a billionaire who made his money from technology. In a news conference, he said two people have already paid SpaceX a "significant" amount of money to send them on a weeklong flight just beyond the moon and back. The SpaceX Dragon cargo capsule approaches the International Space Station prior to installation in this NASA picture taken April 10, 2016.

No one has been to the moon since 1972. NASA flew 24 astronauts around it, and twelve Americans walked on its surface beginning in 1969.

Elon Musk's plan is "a bold challenge" says Eric Stallmer, president of the Commercial Spaceflight Federation (CSF). The group has more than 70 members in the spaceflight business, including Musk's SpaceX.

Stallmer says Musk's work in the last ten years is "incredibly impressive." He started SpaceX with his money, and now has large contracts with NASA and the U.S. defense department. And he is building reusable rockets.

But Musk is not alone in the business race into space. Blue Origin, owned by Amazon's founder Jeff Bezos, is also developing reusable rockets. Using them will bring down the cost of going into space. Last September, Bezos announced a new "heavy-lift" rocket—one that will be able to deliver people and supplies to low-Earth orbit and farther, too.

Other companies, like Richard Branson's Virgin Galactic, are building space airplanes to take passengers for a ride up into space and back — 62,000 miles above Earth. Other companies are developing and building many products for spaceflight, like rockets, and housing for humans traveling and working in space.

The business of space travel

But why space? Why are wealthy business people sending their money into space?

Some of them dreamed of space travel as children, and now they have the money to chase those dreams.

So there is adventure, and yes, there is money.

Stallmer says there is "a huge marketplace to be had in space."

"There's tremendous opportunities to be made, from the commercial aspect of it. Whether it is providing data or communications or remote sensing information. There's that aspect of it. And then the idea that people just want to go to space."

Plus, he says, the cost of doing space business is coming down with new technology.

"There's eighth graders that are building small satellites, these microsats that are going up and performing real world missions for hundreds, and maybe a thousand dollars. And you are seeing companies that are building larger satellite constellations, very affordably."

The commercial space business took off around 2008 when the country was in an economic recession, and many high-tech scientists were out of a job. Since then, CSF claims, its members have created "thousands of high-tech jobs driven by billions of dollars" invested by wealthy people.

Some question whether private companies will be safe as they race into orbit. Stallmer answers that safety comes first for these companies, and that much "attention to detail has to be paid to everything" that they do.

If a company does not have the safest vehicle out there, he says, "you're not going to be in business very long."

Companies that have had failures, like SpaceX and Virgin Galactic, have worked to fix their technology.

Elon Musk's plan to go to the moon is "a very risky mission," says Derrick Pitts, chief astronomer with The Franklin Institute science museum in Philadelphia. He says that while people may question whether a non-government group can achieve this goal, he thinks SpaceX can.

The trip to the moon fits into Musk's "very clear plan" to build a colony on Mars, Pitts explains.

"This is a brand new track in which companies are trying to provide opportunity for regular people, non-astronauts, non-military to be able to consider a trip to space as a viable vacation option."

Now, for about $5,000, a company called Zero G provides rides in a specially designed plane to give people short moments of experiencing the weightlessness of being in space.

"The prices are already beginning to drop and more opportunities will be available for all the rest of us to possibly have some piece of that adventure of being a space explorer."

What will happen to NASA and other space agencies?

Until now, space explorers have been astronauts from NASA, Russia, China or a few other countries. A small number of people also paid governments large sums to travel in space.

As commercial space companies grow, the role of NASA in the U.S. is changing. Some critics say NASA is too careful and too slow and that has left it behind these private companies. But Pitts defends the U.S. space agency, saying NASA is limited by what lawmakers in Congress allow the agency to do. 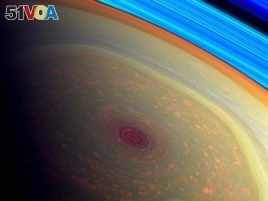 The Cassini spacecraft has captured the first detailed images of a giant hurricane on Saturn.

Pitts praises the work NASA has done getting information about our solar system by using vehicles, probes and remote spacecraft. "It's really just amazing," he says.

Pitts says going forward commercial companies can take care of matters closer to Earth, like satellites and supplies. Then NASA can concern itself with "the big exploration tasks that might carry people out to the deeper reaches of the solar system."

As commercial space business is growing, some predict there will be a human settlement on the moon in 10 years. And that will be just a step on the way to colonize Mars.

Anne Ball wrote this story for Learning English with material from the Associated Press and Reuters. Hai Do was the editor. We want to hear from you. Write to us in the Comments Section and visit us on 51VOA.COM.

federation – n. an organization that is made by of joining together smaller organizations

remote sensing –n. the use of satellites to collect information about and take photographs of the Earth

constellation – n. a group of people or things that are similar in some way