Update Required To play the media you will need to either update your browser to a recent version or update your Flash plugin.
By Jill Robbins
22 August 2020


This week the International Space University, based in Strasbourg, France, ended its first virtual Interactive Space Program, or ISP.

The ISP is an online development program for scientists in different fields of expertise. It trains them to work together in groups, using space resources, to prepare for space flight and related projects.

The ISP is structured to be like a real space mission. About a month before the five-week program began, the groups received training on team dynamics and communication skills. They also learned how to use digital tools for sharing documents, team-building and social exchanges.

Eighty-six men and women, representing 30 different nationalities, took part in the latest Interactive Space Program, called ISP 2020. The participants learned about all areas of study linked to space exploration. Like members of an actual space flight crew, they worked closely with space experts during the program.

The director of the ISP 2020, spoke with VOA about the participants.

"So, ISU in general, not particularly this program, operates on a more almost intergenerational setting so we have participants starting from new graduates at the age of 20, 21. And we have participants, even in this program, at the age of 60 plus who are senior managers in their institutions or organizations. And generally, the average age is around 35. I can definitely say the network that we have at ISU, especially through our alumni -- and we have alumni [from] around 110 countries, at the moment, represented -- that network is actually one of the driving factors for people to ISU programs."

This year 12 of the participants came from India, which has a growing space program. Four of the 12 were awarded a scholarship honoring the Indian American astronaut Kalpana Chawla. She was the first Indian-born woman in space. She was one of the seven astronauts killed when the U.S. space shuttle Columbia broke up when reentering Earth's atmosphere on February 1, 2003.

Just like real astronauts, the participants were asked to complete a simulated space mission. Karacal&#305;o&#287;lu explains:

"The topic of this year, this particular program, is how space -- space technology, space assets in general -- can help the current and the next future pandemics, to solve the situation."

On many days, the program began with a talk by an expert from a space agency official or representative. Alumni of the program talked to the participants at other times. One of its most famous alumni is American Jessica Meir. She spoke with the participants this summer about her work with NASA, the U.S. space agency. Meir was part of the first all-female spacewalk in history.

The interactive training also involved practical aspects of space and health crises, including pandemics. The participants were given a chance to use satellite and communications technology. Other areas of study were artificial intelligence and medical fields. Speakers talked about business, international cooperation and other issues. 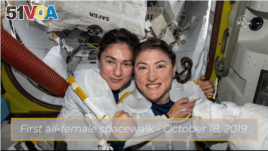 "One is how to monitor pandemics from space, the second one is how to mitigate for a future event, how to prevent and how to be prepared. So actually we have these four different teams, each team actually going much more into depth in each of these areas."

As part of the ISP 2020 experience, the participants were required to perform activities not directly related to space exploration. They had to grow food, cook something, get physical exercise -- such as walking a certain distance -- and plant a tree. Working with speakers of other languages made them communicate better in English. Working across time zones made them understand how astronauts feel as they circle the planet during a typical workday.

At the end of the program, each team produced a report and made a presentation on how space can help fight pandemics. The university says the presentations were given to representatives of the World Health Organization and decision-makers from around the world.

Jill Robbins reported on this story for Learning English. George Grow was the editor.

resource – n. something that provides support or much-needed supplies

dynamics – n. the behavioral relationships between members of a group that are given connected work or duties

alumni – n. pl. people who were students at a particular school, college, or university

artificial intelligence – n. an area of computer science that deals with giving machines the ability to act and make decisions like humans

time zone – n. an area within which the same time is used

monitor – v. to watch, observe or listen to, or check for a special purpose over a period of time

mitigate – v. to make (something) less severe, harmful, or painful

How has knowledge from the space program affected your life? Write to us in the Comments Section.