Update Required To play the media you will need to either update your browser to a recent version or update your Flash plugin.
By Carolyn Nicander Mohr
31 May, 2017


If you think your fitness tracker on your wrist is giving you a good excuse to eat that sweet treat, you may want to think again. A recent study from the Stanford University School of Medicine says fitness trackers are not accurate at tracking calories. The study says, however, that the trackers are accurate at measuring heart rate.

The Stanford researchers examined measurements recorded when people were at rest and while they exercised.

"People are basing life decisions on the data provided by these devices," said Euan Ashley, one of the study investigators.

The study looked at seven fitness trackers worn on the wrist:

Sixty participants of both sexes wore up to four trackers on their wrists as they sat, and as they exercised on a treadmill and a stationary bike. The participants were a mix of sizes and fitness levels.

The trackers measured the heart rates and energy used, or calorie burn, in activities from sitting to a slow walk to a run. They also tested people cycling at different speeds.

Professional medical instruments measured participants' heart and breathing rates as well as temperature and blood pressure. The researchers compared the fitness tracker measurements to those of the "gold standard medical instruments." 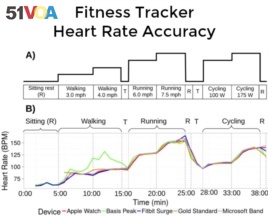 The good news is the tested fitness trackers were accurate at measuring heart rate. All but one of the trackers met the acceptable error rate limit in heart rate measurement.

For both the measurement of energy used and heart rate, the researchers said "the Apple Watch had the most favorable error profile while the Samsung Gear S2 had the least." 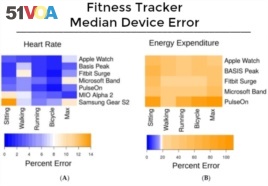 The Stanford researchers are continuing their investigation of fitness trackers. Next, they will test participants wearing fitness trackers during their daily lives and while exercising outside a laboratory.

The full study is available online at The Journal of Personalized Medicine.

The Journal of Personalized Medicine, Accuracy in Wrist-Worn, Sensor-Based Measurements of Heart Rate and Energy Expenditure in a Diverse Cohort.

A summary of the study can be found at Stanford University News Center, Fitness trackers accurately measure heart rate but not calories burned.

fitness tracker - n. a wearable device or a computer application that records a person's daily physical activity, together with other data relating to their fitness or health, such as the number of calories burned, heart rate, etc.

accurate - adj. able to produce results that are correct

calorie - n. a unit of heat used to indicate the amount of energy that foods will produce in the human body

stationary - adj. not moving : staying in one place or position

error - n. something that is not correct

profile - n. a brief written description that provides information about someone or something