Update Required To play the media you will need to either update your browser to a recent version or update your Flash plugin.
By Hai Do
15 May, 2019


Lawmakers in the American state of Alabama have given final approval to a ban on nearly all abortions. The bill is part of an effort in several states to have the U.S. Supreme Court reconsider a women's right to end a pregnancy.

Alabama's Republican governor, who has long identified as anti-abortion, signed the bill into law on Wednesday.

The states of Kentucky, Mississippi, Ohio and Georgia have all recently approved bans on abortion once a fetus's heartbeat is detected. A heartbeat can develop by the sixth week of a woman's pregnancy. That is before most women know they are pregnant.

The Alabama bill goes further. It seeks to ban all abortions, even in cases of rape. The only exception would be when a woman or girl's health is at serious risk.

The bill would punish doctors who provide abortions with up to 99 years or life in prison. Under the bill, women seeking or undergoing abortions would not be punished. 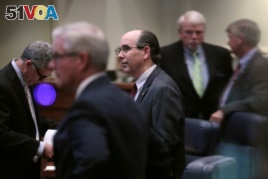 Senator Clyde Chambliss (R), center, is seen with other senators during a state Senate vote on the strictest anti-abortion bill in the United States at the Alabama Legislature in Montgomery, Alabama, May 14, 2019.

Alabama Senator Clyde Chambliss argued in support of the bill. The Republican lawmaker said the reason for passing the bill was "so that we can go directly to the Supreme Court to challenge Roe versus Wade."

The U.S. Supreme Court ruled in 1973 that a Texas law criminalizing abortion violated a woman's constitutional right to privacy. The ruling, known as Roe v. Wade, protected a woman's right to choose whether to have an abortion.

America's legal system is based on the principle that courts follow rulings laid down in earlier judicial decisions. The Roe v. Wade ruling has faced repeated challenges but has not been overturned.

However, with the addition of two new conservative justices that President Donald Trump appointed to the court, anti-abortion lawmakers hope to have the ruling overturned.

Earlier this week, the Supreme Court with its conservative majority voted 5-4 to overturn an unrelated Supreme Court case from 1979. In dissent, Justice Stephen Breyer noted, "Today's decision can only cause one to wonder which cases the court will overrule next."

Back in Alabama, Senator Chambliss said, "While we cannot undo the damage that decades of legal precedence under Roe have caused, this bill has the opportunity to save the lives of millions of unborn children."

Critics have promised to challenge the bill. Randall Marshall, director of the American Civil Liberties Union of Alabama, said his organization is writing a complaint.

Democrats criticized the ban as a way to control women and as a waste of taxpayer money. Democratic Senator Bobby Singleton said that under the ban, doctors who perform abortions could serve more prison time than rapists.

The group Physicians for Reproductive Health said the near total ban on abortions would have a disastrous effect on healthcare. In a statement, board member Dr. Yashica Robinson said, "Physicians will be unwilling to help patients in need, even when continuing pregnancy is detrimental to a patient's health...out of fear of being scrutinized by the criminal justice system."

In answer to the new laws against abortion rights, American actor and activist Alyssa Milano has called for a sex strike using the social media hashtag #SexStrike. She urged women to refuse sex with men "until we get our bodily autonomy back."

Hai Do wrote this story for Learning English based on Associated Press and Reuters news reports. Ashley Thompson was the editor.

abortion - n. a medical procedure used to end a pregnancy

detect - to discover or notice

challenge - v. to question the authority

dissent - v. to publicly disagree with an official opinion

precedence - n. the condition of being more important than something else

complaint - n. a formal charge saying that someone has done something wrong

autonomy - n. the state of existing or acting separately from others