Young people from around the United States gathered in Pasadena, California recently to talk about businesses they created.

The businesses are completely virtual. Their products and services are not real. And only virtual money is exchanged.

One thousand three hundred students attended the conference, which was organized by Virtual Enterprises International.

The New York City-based group says it helps high school students learn modern business skills, including problem solving, communication and technology. The group says it is influenced by the European tradition of apprenticeships in which students learn from people already working in a business or trade.

The Pasadena event seemed like a trade show with many virtual businesses offering products such as communications technology or food.

Students from Miguel Contreras Business and Tourism School in Los Angeles tried to get customers for their business, Big City Tours.

Teacher Darrell Iki helped the students create the company, which exists only in their classroom and online. 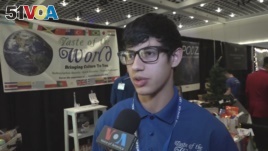 Their business is special, they say, because it provides virtual tours to different parts of Los Angeles. Customers can learn about the city's ethnic heritage, see high-end fashion or visit stores.

Students from Century High School in Santa Ana, California were trying to sell a translation device for use by travelers.

Iki says the experience is just like a real business. Students start with a business plan. They are named to leadership positions and learn to "work together, having a common goal in a potentially successful business."

Nick Chapman is president and national program director for Virtual Enterprises International. He says students quickly realize that operating a business is a lot of work.

"They're running meetings, they're networking, they're meeting with professionals, they're working with mentors, all of the things that are really going to set them apart when they get into college and then move on into their careers."

Catalina Garcia is glad that she participated in the Virtual Enterprises International program. She says the skills will help her in any profession.

Miguel Santin, a student from Century High School, said he now understands the pressure of running a company. He works in a virtual company called Taste of the World. He has overseen employment and digital media for the virtual company.

"You really need to be hands on with your employees and make sure you guys have strong communication. Otherwise the company just won't prosper as much as you would expect."

Taste of the World is designed as a subscription service. It sends treats to customers through the mail.

Teacher Alan Gerston helped set up the business. "You sign up for three months, six months, a year, and you receive a snack box with trinkets and information about the company every single month throughout your subscription time," he said.

However, no real money is exchanged.

"You would pay within our virtual economy," Gerston said, "using virtual money in a web-based simulated bank system."

"All the kids in the program have bank accounts...so when they buy something, we give them a receipt," he said.

Stephen Jarvis is with the Elizabeth Learning Center in Cudahy, California. He told VOA there is a lot to learn.

He added, "It isn't just selling something. It's all the things that go on behind the scenes – creating documents, figuring out if you're making money or losing money."

Catalina Garcia will start college later this year. She received financial assistance and hopes to become a doctor. She is a student entrepreneur with the Big City Tours project.

"It's helped me a lot because when I was trying to get the scholarship, I went to the interviews, and being in this company has helped me really prepare my presentation skills and be able to talk to other people."

Garcia said the skills she has gained in a virtual company have helped no matter what she does in the future.

Mike O'Sullivan reported this story for VOANews. Mario Ritter adapted his report for Learning English. George Grow was the editor.

virtual – adj. not real or physical

apprenticeship – n. an agreement in which a person learns about a job from someone experienced in the trade

customers – n. anyone who pays for or uses goods or services

online – adj. of or involving computers or computer programs

prosper – v. to become successful, to do well

trinkets – n. small goods that are not especially valuable

simulated – adj. looking, feeling or behaving like something real, but that is not real