Update Required To play the media you will need to either update your browser to a recent version or update your Flash plugin.
By Mario Ritter
06 August, 2018


Japanese high school students have created a virtual reality program to mark the 73rd anniversary of the atomic bombing of Hiroshima.

The American bombing on August 6, 1945, along with the bombing of Nagasaki three days later, ended World War II. The first attack killed an estimated 140,000 people.

The students produced a five-minute program that recreates the sights and sounds of Hiroshima before, during and after the bombing.

Their project took two years to complete. The students and their teachers undertook the effort in hopes that such an event will never happen again.

The program lets them take a virtual walk along the Motoyasu River before the bombing.

It shows the buildings and businesses that once stood.

Users also can enter a post office and the Shima Hospital courtyard. The bomb exploded directly above the hospital, completely destroying it. They can see the remains of a building now called the Atomic Bomb Dome.

The program shows the sunny, summer day in 1945. Cicada insects sing in the trees.

Then, a flash of light, followed by a huge explosion.

Buildings are gone in a moment. Smoke and fires spread under the darkened sky. 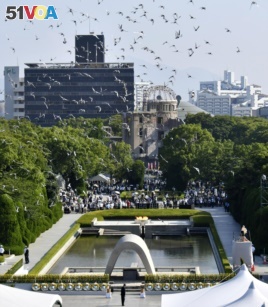 Doves fly over the Peace Memorial Park with the Atomic Bomb Dome in the background, at a ceremony in Hiroshima, western Japan, August 6, 2018, on the 73rd anniversary of the atomic bombing of the city. Mandatory credit Kyodo/via REUTERS

Students' project: a race against time

Some of the students said virtual reality technology was a good choice to reach their goal.

The students who worked on the project belong to a computer skills research club at Fukuyama Technical High School. Fukuyama is a city about 100 kilometers from Hiroshima.

Mei Okada said of the virtual reality project, "Even without language, once you see the images, you understand."

Eighteen-year-old Yuhi Kakagawa said, at first, he did not have much interest in what happened so long ago. But after creating the buildings from photos of what once existed, "I felt how scary atomic bombs can be," he said. He understood that is was "really important to share this with others."

To recreate Hiroshima before the bombing, students studied photographs and spoke to survivors. Then, they used software to add realistic details to the virtual reality program.

"Those who knew the city very well tell us it's done very well. They say it's very nostalgic," said Katsushi Hasagawa. Hasagawa is a computer teacher who supervises the club.

He said seeing the effect of people remembering the past "makes me glad that we created this."

The students worked through their summer vacation in classrooms without an air cooling system. Temperatures reached as high as 35 degrees Celsius as they labored to create the video.

Because remaining survivors are so old, Hasegawa said, it was a race against time.

nostalgic –adj. the feeling of both pleasure and sadness of remembering the past