Update Required To play the media you will need to either update your browser to a recent version or update your Flash plugin.
By Bryan Lynn
20 October 2021


British researchers say they have created an artificial intelligence (AI) model that is highly effective at predicting rainfall within the next 90 minutes.

The model was built by scientists at Google-owned research company DeepMind in London. The company partnered with researchers at the University of Exeter in Britain and the Met Office, the British government's national weather service.

The team says tests of the system showed it produced more accurate predictions, or forecasts, for short-term rainfall than other existing systems. The paper recently appeared in the publication Nature.

The scientists centered on a kind of weather prediction known as "precipitation nowcasting." This is defined as the prediction of precipitation, like rain, within the next 1-2 hours. Making forecasts of this kind has traditionally been very difficult. 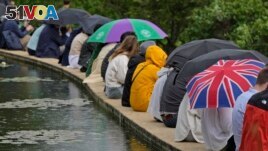 But accurate nowcasting can be a very important tool for preparing for possible weather emergencies. It can be used by officials in the areas of water management, agriculture, air and ground traffic control and outdoor event planning.

The Met Office has depended on a system called numerical weather prediction since the early 1950s. That method uses "the latest weather observations alongside a mathematical computer model of the atmosphere" to make forecasts.

The system collects data on the level and movements of fluid in the atmosphere based on radar and satellite data. The computer then processes the data and produces map-like models to predict future weather.

The Met Office currently produces forecasts with a powerful new "supercomputer" that became fully operational in 2017. The agency says the increased power permits forecasters to make more accurate predictions based on detailed models.

But the supercomputer is designed to produce forecasts for very wide areas over a period of hours, days or a week. The computer still struggles with precipitation predictions within 1 to 2 hours.

The DeepMind team says its model uses machine learning to capture the amount, timing and place of rainfall within 90 minutes to 2 hours.

Machine learning involves feeding massive amounts of data to computers to train the machines to learn patterns and behaviors over time. In this case, the system was trained to make predictions of future radar based on past radar readings. The study used radar data from both Britain and the United States.

"We were especially interested in the ability of these models to make predictions on medium to heavy-rain events, which are the events that most impact people and the economy," the team said.

The scientists said their model aims to create predictive "movies" of immediate weather patterns. They said that, unlike other systems, theirs can accurately capture large-scale events, as well as several different rain possibilities. This combination permits "rainfall uncertainties" to be deeply explored.

During the testing process, the team said the model showed "statistically significant" improvements in these areas compared to competing methods. In addition, the researchers reported that a group of more than 50 weather experts from the Met Office rated the AI model to be more accurate and useful in 89 percent of cases than existing forecasting systems.

Despite the study results, researchers admitted that the model still has limitations. They said "more work is needed to improve the accuracy of long-term predictions and the accuracy on rare and intense events."

The team said it will now center on developing new methods to test and measure the model's performance. It will also work to create more specialized systems to work in real-world conditions.

Bryan Lynn wrote this story for VOA Learning English, based on reports from DeepMind, the Met Office and Nature. Susan Shand was the editor.

management – n. the way in which something is carried out and controlled

pattern – n. a particular way that something is often done or repeated

impact – n. an effect that a person, event or situation has on someone or something

uncertain – adj. not sure or not able to decide about something

statistic – n. a fact in the form of a number that shows information about something