Update Required To play the media you will need to either update your browser to a recent version or update your Flash plugin.
By Alice Bryant
12 July 2020


A new study shows that there was mixing between ancient native peoples from Polynesia and South America.

Researchers say they found a single episode of the two groups interbreeding around 800 years ago after a long trip across the Pacific Ocean. 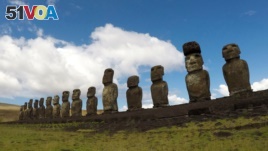 For a long time, the question of such contact had been debated among scientists. The contact was theorized partly because of the presence of a kind of sweet potato in the islands of Polynesia. The plant is native to South and Central America.

Scientists said last week that an examination of DNA from 807 people made the results clear. The genetic material came from 14 Polynesian islands and Pacific coastal Native American populations from Mexico to Chile.

People from four island areas in French Polynesia had DNA that showed interbreeding with South Americans at around the year 1200. Those South Americans were most closely related to present-day native Colombians.

The islands are about 6,800 kilometers from South America.

People from Easter Island also had South American ancestry, some from modern Chilean immigrants and some from the same ancient mixing as the other islands.

Easter Island, which belongs to Chile, was settled sometime after the interbreeding 800 years ago. The island, which lies 3,700 kilometers west of South America, is known for its massive stone statues.

The study left open the question of who crossed the Pacific Ocean. Were Polynesians traveling east and arriving in Colombia or maybe Ecuador? Or were South Americans traveling west?

Alexander Ioannidis is a computational geneticist at Stanford University in California. He was the lead author of the research, which appears in the science journal Nature.

Ioannadis says he thinks the Polynesians crossed the Pacific, since they were "exploring the ocean and discovering some of the most distant Pacific islands around exactly the time of contact." The Reuters news agency reported his comments.

If the Polynesians reached the Americas, he added, they probably traveled in sailing canoes with two hulls. He noted these boats operate much like a modern catamaran, another kind of two-hulled boat.

The contact explains the mystery of how the sweet potato arrived in Polynesia centuries before European sailors. Ioannidis noted the vegetable's name in many Polynesian languages - kumara - sounds similar to its name in some languages spoken in the Andes Mountains.

interbreed - v. to breed or cause to breed with another of a different race or species

theorize - v. to think of or suggest ideas about what is possibly true or real : to form or suggest a theory about something

DNA - n. a substance that carries genetic information in the cells of plants and animals — often used before another noun

author - n. a person who has written something

hull - n. the main body of a boat or ship, including the bottom, sides, and deck but not the masts and other parts