Study: Coronavirus May Keep Poor US Students Away from College

Update Required To play the media you will need to either update your browser to a recent version or update your Flash plugin.
By Pete Musto
25 July 2020

The move cut off students in their final year of high school from school guidance counselors. At the time, families struggling with economic hardship began reconsidering plans for higher education.

From the start of the coronavirus health crisis, the number of new requests for college aid fell by nearly half compared to levels one year earlier. The Associated Press, or AP news agency studied United States government records. It found that the smaller number resulted, in large part, from a sharp drop off among students at schools in low-income areas. 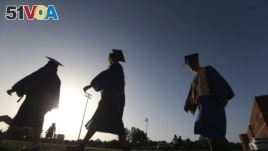 In this June 27, 2020, file photo, Saltillo High School seniors make their way to the football field as the sun begins to set for their graduation ceremony in Saltillo, Mississippi. (Thomas Wells/The Northeast Mississippi Daily Journal via AP, File)

The numbers have risen as states and schools have launched campaigns urging students to seek federal aid for a college education. But the numbers are still down from last year.

This has raised concerns among U.S. education officials who say thousands of students may be choosing to delay or even avoid college. And this might have a serious effect on their future employment and earnings.

"The ... kids are going directly into the workforce. They're closing the door on post-high school learning," said David Nieslanik. He serves as principal of Southridge High School in Beaverton, Oregon. Nieslanik noted that he saw only students from more wealthy families seek out aid once classes moved online.

The FAFSA is short for Free Application for Federal Student Aid. It is required for students to be considered for federal aid for a college or university education in the U.S. Students are often required to complete the form for state aid as well.

The AP found that in the four weeks starting March 13, the number of completed applications was down 45 percent compared to the same period a year ago. The drop was greatest at Title I schools, a federal term for public schools that have larger shares of low-income students.

In general, FAFSA applications were down by 70,000 as of June 19. That represents a 3.7 percent drop for the entire application period.

Even before the health emergency, some states had been expecting to see decreases. Yet as COVID-19 spread, every state had lower numbers compared to 2019 levels.

Schools say the public health crisis affected the decrease in more than one way. Separated from their schools, students lost contact with advisors who usually guide them through the complex financial aid process. Families without dependable internet service struggled to complete the form online. And as the U.S. economy weakened, some students took jobs and put college plans on hold.

The timing of the crisis worsened its effect on low-income students, experts say. It came at "the very worst time," said Gregory Cole, principal of the Mojave High School in North Las Vegas, Nevada.

Many parents lost jobs as Nevada's gaming industry suspended operations, and some students took jobs in food stores or eateries. Adding to the problem was the fact many students come from families that had never filed the form.

Once schools closed, guidance counselors could no longer invite students into their offices to talk or ask families to school to explain the FAFSA. Instead, schools were left sending emails that often went unanswered, or they depended on unpredictable video conferencing services to help families with paperwork.

Education officials are urging U.S. students to apply for financial aid over the summer, even if only to see how much money they could receive. The state of North Carolina recently launched a "FAFSA Frenzy" campaign, while Kentucky is holding "FAFSA Fridays," urging students to apply.

Collin Binkley and Larry Fenn reported on this story for The Associated Press. Pete Musto adapted it for VOA Learning English. George Grow was the editor.

sharply – adv. suddenly and by a large amount

guidance counselor(s) – n. a person who gives help and advice to students about educational and personal decisions

hardship – n. something that causes pain, suffering, or loss

principal – n. the person in charge of a public school

enroll – v. to enter someone as a member of or participant in something

application(s) – n. a formal and usually written request for something, such as a job, admission to a school or a loan