Update Required To play the media you will need to either update your browser to a recent version or update your Flash plugin.
By Xiaotong Zhou
01 May, 2018


More than 2 million immigrants from sub-Saharan Africa live in the United States. A new study from the Pew Research Center finds that they are, on average, college-educated and employed. In fact, they are more likely than native-born Americans to have pursued advanced degrees. And they are employed at about the same rates as the general population.

The study is important for several reasons. First, it shows that most sub-Saharan Africans living in the U.S. do not fit a stereotype of a struggling, out-of-work person with little schooling.

Monica Anderson is a researcher at Pew and one of the writers of the report. She told VOA that the research team wanted to compare the backgrounds of African immigrants in the U.S. to those in Europe.

"What we found is that the sub-Saharan African immigrant population [in the U.S.] really stands out, and that they are a very highly educated group," Anderson said over the phone.

The Pew study is based on 2015 data from the U.S. Census Bureau and Eurostat's Labor Force Survey.

One reason for different backgrounds among sub-Saharan African immigrants is proximity, Anderson said – in other words, how close things are to each other. Europe is much easier to reach than the U.S. for low-income Africans. They can come by boat or other ways, whether or not the travel is safe. Hundreds of thousands have risked crossing the Mediterranean Sea to go to Italy or Greece.

In contrast, African immigrants coming to the U.S. often have the money to travel by plane, as well as permission to enter the country once they arrive. 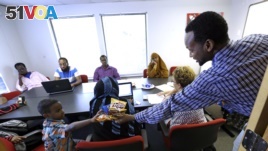 FILE - Somali immigrant leader Jamal Dar, right, who arrived in the U.S. two decades ago from Kenya, hands out snacks to a boy at a community engagement and civic language class for former Somali residents in East Portland, Oregon, July 21, 2015.

The State Department said that in 2015, Africans made up almost half of those invited to ask for immigrant visas through a lottery program.

And the Department of Homeland Security reported that in 2016, about one-third of refugees approved to enter the U.S. were from Africa.

But previous research found that higher education and employment levels do not always mean a higher quality of life for African immigrants in the United States.

In 2015, researchers at Pew looked at black immigrants from Africa, the Caribbean, Central America and South America. Researchers found that that their median household income was more than $8,000 lower than the U.S. average.

They also owned homes at a rate less than the overall U.S. population, and were more likely to live below the poverty line.

The findings suggest that even though sub-Saharan African immigrants have high education and employment rates, they may not have all the opportunities other groups enjoy.

Salem Solomon reported this story for VOA. Xiaotong Zhou adapted it for Learning English. Kelly Jean Kelly was the editor.

stands out – v. a person or thing that is better or more important than the others in a group

lottery – n. a system used to decide who will get or be given something by choosing names or numbers by chance

median – adj. in the middle