Update Required To play the media you will need to either update your browser to a recent version or update your Flash plugin.
By Bryan Lynn
14 March, 2018


A study has found that false news stories posted on Twitter travel much faster and reach far more people than true ones.

The study was done by researchers at the Massachusetts Institute of Technology's (MIT) Media Lab. Results were reported in the publication Science. It was one of the biggest efforts yet to study the effects of social media on the spread of real and false news.

Twitter cooperated with the study. The company gave the MIT Media Lab access to its data and provided money for the project.

The team researched stories posted on Twitter since the service began in 2006. It identified and examined more than 126,000 stories tweeted by about 3 million people through the end of 2016.

The stories chosen had been investigated by various independent fact-checking organizations to decide whether they were true, false, or a mix of both. Nearly two-thirds of stories were found to be false, while about one-fifth were true. The rest were mixed. 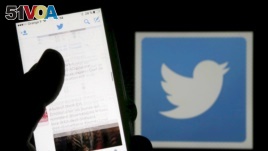 A man reads tweets on his phone in front of a displayed Twitter logo in Bordeaux, southwestern France, March 10, 2016.

The researchers compared the speed and reach of stories found to be false to those verified as true.

Soroush Vosoughi is a data scientist with MIT's Media Lab who helped lead the project.

"What we found was that false news spreads further, faster and broader than true news in every category of information."

Vosoughi said the three false stories that traveled the farthest and fastest were about a Muslim guard called a hero in the 2015 Paris bombings; an Iraq war veteran finishing as runner-up to Caitlyn Jenner for a courage award ; and a show of "The Simpsons" with a story line back in 2000 about a Trump presidency.

The study showed that the average false story took about 10 hours to reach 1,500 Twitter users, compared to about 60 hours for the truth. False information was found to reach 35 percent more people than true news.

While true stories almost never got retweeted to more than 1,000 people, the top 1 percent of false ones reached as many as 100,000 people.

Vosoughi said the speed and reach of false news stories was especially intense when related to politics. False political news spread faster and to more people than stories about terrorism, natural disasters, science and other subjects, the study found.

The researchers noted increases in false political stories during the 2012 and 2016 American presidential races.

Twitter, Facebook and other social media companies have come under pressure from U.S. lawmakers and international regulators to do more to prevent the spread of false news. U.S. officials have accused Russia of using social media to affect public opinion on issues and trying to interfere in the 2016 U.S. election. 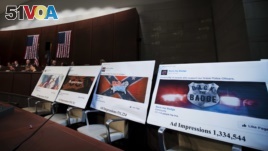 Facebook advertisements linked to a Russian effort to disrupt the American political process are shown at a Congressional hearing.

The use of automated robots to post on Twitter and other services is one area that has received heavy criticism. In a tweet sent March 1, Twitter co-founder and CEO Jack Dorsey admitted widespread misuse of the service by both robots and humans.

"We aren't proud of how people have taken advantage of our service, or our inability to address it fast enough," he wrote. Twitter says it has sought help from outside experts to better deal with the problem. Dorsey personally promised "to hold ourselves publicly accountable towards progress."

Social media companies have also experimented with computer programs and hired more humans in an effort to identify and remove false stories.

"One reason false news might be more surprising is, it goes against people's expectations of the world," he said. "If someone makes up a rumor that goes against what they expected, you are more likely to pass it forward."

Study co-author Deb Roy is a former media scientist at Twitter who now runs MIT's Laboratory for Social Machines. He says the study proves that false news is clearly still winning out over truth on Twitter.

He added that the results raise many questions about what methods should be used to help prevent the problem in the future. Roy believes this will likely involve combined efforts between social media companies, news publishers and users themselves to fight false news.

"Let's not take it as our destiny, that we have entered into a post-truth world from which we will not emerge," he said.

automated – adj. done automatically by a machine or system, not done by a person

verified – v. proven to be true

broad – adj. including or involving many things or people

regulator – n. person or government agency that controls a public activity by making and enforcing rules

advantage – n. something good about a situation that is helpful

destiny – n. things that will happen to someone in the future