Update Required To play the media you will need to either update your browser to a recent version or update your Flash plugin.
By Bryan Lynn
05 June, 2018


Some American students recently completed the school year and others are preparing to end soon. But as students in some parts of the country already deal with hot classrooms, the summer break cannot come soon enough.

Some new research has found that student performance drops when temperatures rise. The study mainly blames a lack of air-conditioning in many U.S. schools for causing learning problems.

The private, non-profit organization National Bureau of Economic Research released the working paper, Heat and Learning. Its writers are from Harvard, the University of California at Los Angeles, the University of Georgia and The College Board.

The researchers examined test results of 10 million U.S. students attending high school from 2001 to 2014. The paper says the students scored lower during hot school years than cool ones.

The research is thought to be the first major study to center on the direct effects of heat on school learning. The study reported that on average, a one degree increase in temperature during the year before an exam led to a one percent drop in learning. 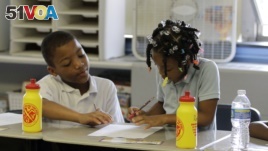 The research found that days reaching at least 38 degrees Celsius reduced student scores by up to 50 percent. The findings suggest higher temperatures greatly harm classroom productivity for both teachers and students.

"Our findings suggest that, even in highly-industrialized economies, heat exposure can reduce the rate of learning and skill formation," the researchers reported.

They wrote that students from poor families and minority groups suffered the most learning problems due to heat.

The study found that higher heat affected black and Hispanic students about three times more than whites. It suggested the effects of heat in the classroom could be responsible for about 13 percent of the U.S. racial achievement difference. The study noted that many black and Hispanic students live in hotter places than white students. It also found more white children attended schools with air-conditioning.

The study reported that only high temperatures on school days caused learning problems. Hotter weather during the summer and on weekends had little influence. "This suggests that heat's disruption of instruction or homework time is responsible for the observed drop in test scores," they wrote.

The study showed a clear connection between lower student performance and a lack of air-conditioning in schools. The researchers said school air-conditioning appears to correct nearly all damaging effects of high temperatures on student achievement.

A separate investigation by the education website The 74 showed most of America's largest school districts had air-conditioning in classrooms. However, 11 large districts reported many of their classrooms were not air-conditioned. Some were in places where temperatures can repeatedly reach 32 degrees Celsius or higher.

In a 2014 report, the U.S. Department of Education said 30 percent of public schools reported having air-conditioning systems that were in fair or poor condition.

Last week, school officials in St. Paul, Minnesota requested that fans and extra water be brought in to help students deal with severe classroom heat. Two-thirds of schools in the St. Paul Public Schools district do not have air-conditioning.

District officials said they have not seen air-conditioning as necessary at all schools since they are closed during the hottest summer months.

One teacher took to Twitter to report the temperature in his classroom rose to 38 degrees Celsius. History teacher Mark Westpfahl said he felt light-headed and experienced head pain, both signs of heat exhaustion. He said he was also worried about his students and had to send several to see the school's healthcare worker.

exposure – n. condition of being affected by or experiencing something

achievement – n. something good that someone achieves

disruption – n. interference into or stopping something

instruction – n. the action or process of teaching

heat exhaustion – n. condition during which a person feels very weak and sick after being in a very hot place for too long