Update Required To play the media you will need to either update your browser to a recent version or update your Flash plugin.
By Bryan Lynn
09 February 2020


A new study suggests some dinosaurs survived periods of strong volcanic activity about 183 million years ago in what is now South Africa.

The footprints were discovered on a present-day farm in South Africa's Karoo Basin. During the Early Jurassic period, the area experienced intense volcanic activity, including massive lava flows. The activity may have caused great harm to the local environment and changed the chemistry of the atmosphere. 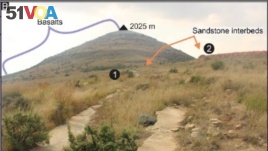 Geological map of the vicinity of the Highlands ichnosite, showing views (B) of the interbed units and basalts to the NE and (C) to the SW from the track-bearing surface. (PLOS ONE)

Fossils examined from the time provide evidence that the volcanic activity caused mass extinctions of many species – both on land and in the oceans. Because there is often a lack of skeletal bones, fossil footprints are sometimes the only evidence that animals were present in an ancient environment.

The footprints are in sandstone found between layers of volcanic rock. Researchers say the fossils show that the prints belonged to at least three different animals that walked near the sandy edge of a stream.

The scientists believe the footprints are proof that some dinosaurs and other animals were able to survive in the area during quieter periods between volcanic explosions.

Geologist Emese Bordy is with South Africa's University of Cape Town. She calls such animals "Karoo firewalkers." They were among the last animals known to have lived through the period's extreme conditions.

But Bordy also noted, "Hot was hot back then, too. So no, they did not walk on the lava."

Bordy said the footprints were from both meat- and plant-eating dinosaurs. One was a relatively small two-legged meat-eating dinosaur. Another was a similarly small four-legged dinosaur that likely ate plants, while the third may have been an early mammal species.

The footprints were found in plant remains and sediment samples from rivers and lakes. Bordy said, "For short time periods, the streams were flowing again, the sun was shining, the plants were growing and the animals - among them dinosaurs - were grazing and hunting."

She added: "This story helps us change the way we see life in stressful and hostile environments, and thus improves our understanding of the history of life on Earth."

Bordy and other researchers published their findings in the journal PLOS ONE.

Bryan Lynn wrote this story for VOA Learning English, based on reports from Reuters and PLOS ONE. Ashley Thompson was the editor.

fossil – n. part of an animal or plant from the past that has been preserved in rock

geologic – adj. the study of rocks and the physical processes of the earth

lava – n. hot melted rock that comes out of a volcano

extinction – n. a situation in which a type of animal no longer exists

mammal – n. a kind of animal that feeds milk to its young and that usually has hair or fur covering most of its skin

hostile – adj. unpleasant and not suitable for living or growing