Study: Plant-Eating Animals Are Most at Risk of Extinction

Update Required To play the media you will need to either update your browser to a recent version or update your Flash plugin.
By Pete Musto
13 August 2020


Scientists often worry about the loss of the world's meat-eating animals. But a wide-reaching new study finds that plant-eating animals, or herbivores, are at higher risk of extinction.

In the new study, the International Union for Conservation of Nature, or IUCN, shows that about one in four species of herbivores, or 25.5 percent, are considered threatened. The IUCN, an organization of government and civilian groups, is widely recognized as the leading scientific source on extinction risk.

Trisha Atwood, of Utah State University, led the research. She told the Associated Press that by comparison, 17.4 percent of meat eaters and 15.8 percent of omnivores, animals that eat meat and plants, are at risk. 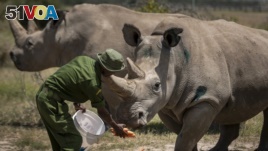 The study appeared earlier this month in the publication Science Advances.

The researchers examined data for 22,166 species of animals with backbones. They noted whether each animal was a reptile, bird or mammal. They also examined animals by size, living environment and the area of the world they live in. On just about every measure, they found plant eaters were most at risk, especially in forest environments.

"The implications for this are huge," Atwood said. "We need to think about herbivores as being kind of the poster child of extinction."

So instead of polar bears and tigers, think of plant eaters like rhinoceroses and green sea turtles, Atwood said. The last male northern white rhinoceros in the wild died in 2018, but scientists are working to save the species through the use of stored embryos.

The study centered on proportionality. There are many more predator species, so there are more predators at risk in total, but a larger share of herbivores are in trouble.

Scientists even examined data on more than 2,000 species no longer alive. Again, they found herbivores had the highest share of extinction risk.

Atwood went into the study thinking that meat eaters were most at risk. However, she said the data — which included land and water species — pointed clearly at herbivores.

Meat eaters she added, also are in trouble, but not as much as the herbivores they often eat.

Size may be part of the reason herbivores are more at risk, the ecologist said. Large herbivores need to eat more and so require more land. But the environments in which they live are shrinking, she said. Meat eaters and omnivores have larger areas in which to find food.

Duke University conservation scientist Stuart Pimm, who was not part of the study, expressed some criticism of the research. He said it does not take into consideration the huge importance of available land area for food searches, a critical need for meat eaters.

University of Miami biologist Mauro Galetti also was not part of the research. He said Atwood's study is important, makes sense and questions the traditional belief that environmental protection projects should center on top meat eaters.

Large herbivores are highly important, especially in places like forests, Galetti said. "A world without herbivores would be a disaster for any natural ecosystem."

Seth Borenstein reported on this story for the Associated Press. Pete Musto adapted it for VOA Learning English. Caty Weaver was the editor.

poster child – n. a person who represents or is identified with something

proportionality – n. the condition of having a size, number, or amount that is directly related to or appropriate for something

ecosystem – n. everything that exists in a given environment