Study: Replacing Fossil Fuels in US Could Cost $4.7 Trillion

Update Required To play the media you will need to either update your browser to a recent version or update your Flash plugin.
By Bryan Lynn
06 July, 2019


A new study has found that replacing fossil fuel power systems in the United States could cost up to $4.7 trillion.

The study was released by energy research company Wood Mackenzie. The company is based in Edinburgh, Scotland.

The report includes one of the first independent cost estimates for completely ending power sources that produce carbon pollution.

Some American politicians support the complete replacement of all fossil fuel-based energy sources in the United States with zero carbon systems. The study estimates this could cost at least $4.7 trillion and could present major economic and social difficulties. The total would amount to about $35,000 per U.S. household, the study found.

Several Democratic presidential candidates have proposed their own plans to reach the goal of zero carbon emissions. Former Vice President Joe Biden has said his plan would cost about $1.7 trillion. Another candidate, Beto O'Rourke, has proposed a $5-trillion plan to get to zero emissions. 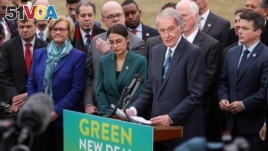 Such ideas seek to appeal to a growing sense of urgency about climate change on both sides of the political divide. But many Republicans, including President Donald Trump, have criticized the Democratic proposals as being costly and impossible to carry out. They say the plans would harm the economy.

A public opinion study released last week by Reuters/Ipsos showed that most Americans support "aggressive" climate change action like that proposed by Democrats. But that support falls sharply if individuals sense the plans would personally cost them.

Wood Mackenzie's report centers only on the costs to replace fossil fuel sources used to generate power. One of the main fossil fuel sources for U.S. power plants is coal. Coal plants give off air pollutants and heat-trapping gases that have been linked to climate change.

The study said the change from fossil fuels to green sources would require "a complete redesign" of the current power system.

The report estimated that more than 320,000 kilometers of electrical wires would have to be added to carry wind and solar energy from rural areas to major cities. The estimated cost for that effort would be about $700 billion.

The study noted that major costs could be reduced if the process of completely moving away from fossil fuel sources took place over a longer period of time.

Bryan Lynn wrote this story for VOA Learning English based on reports from Reuters and Wood Mackenzie. Ashley Thompson was the editor.

fossil fuel – n. a fuel, such as coal, oil, or natural gas, that is formed in the earth from dead plants or animals

capacity – n. the largest amount of something that can be held in a container, building, etc.