Update Required To play the media you will need to either update your browser to a recent version or update your Flash plugin.
By Mario Ritter Jr.
26 July 2020


A South Korean study shows a jump in the number of online stock traders seeking help for gambling addiction.

The number rose 200 percent during a two-month period as COVID-19 restrictions and working-from-home gave South Koreans more time to trade stocks during the day.

Individual investors who buy stocks online are known locally as ants. These retail investors were partly responsible for a 50 percent increase in share prices after concerns about the coronavirus led to a sharp price drop in March. 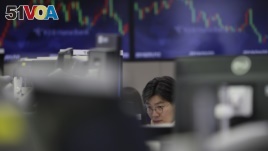 A trader watches the computer monitors in Seoul, South Korea. Online trading can easily be done at home and has increased during under coronavirus measures. File (AP Photo/Lee Jin-man)

Between the sell-off in March and May, a total of 214 people sought help for trading-related addictive behavior. That information comes from the Korea Center on Gambling Problems. It said that number was part of an overall 16 percent increase in callers seeking help for gambling.

The problem could be a sign of things to come if work-from-home requirements and social distancing become part of normal life, experts warn. Individuals living alone have even fewer ways to get support from friends to control addictive behavior.

Compulsive stock trading also lacks the social pressure that may act to keep people away from more traditional games of chance. However, experts note that the forces driving the two activities are similar.

South Korea has not enforced any stay-at-home measures, even when the virus was spreading quickly through the country in February and March. However, people and businesses have largely followed government guidelines. Many South Koreans have avoided social gatherings and are working from home.

One individual who sought help was a 35-year-old bank employee whose family name is Lee. He had been trading stocks online for over one year. He became an active trader after talking with a friend who claimed to have earned a lot of money buying and selling stocks.

Lee had some success as an online trader. Once he made a profit of several hundred thousand dollars on a single trade. But increased trading time because of Lee working from home resulted in him losing $1 million over five days.

Lee said his wife insisted that he seek help from an expert on gambling addiction.

"We tend to see an influx of people seeking help after a huge market dive," said Kim Yeon-su, a treatment manager at the Korea Center on Gambling Problems help center in Seoul.

The number of active investment accounts rose to 2.8 million from the middle of January through mid-July, compared to 1.6 million in the same period last year, records show. Most of these accounts were retail investors or day traders.

One example of the increased activity was the July listing of stock for SK Biopharmaceuticals. Each of the company's shares on offer for retail investors had 323 possible buyers. Their total down-payments, money offered for buying the stock, totaled about $26 billion. Reuters news agency notes that successful buyers saw their investment increase in value by 400 percent in four days.

Investor message boards on South Korea's main internet search engine have high traffic throughout trading hours. Usual posts include "I want to become a king ant" and "I was robbed today as usual."

Mental health experts said trading can become high-pressure gambling. They say there is little to hold back traders when they can trade easily online at home and often using credit.

Shin Young-chul is a mental health expert at Kangbuk Samsung Hospital. He said gambling pushes the brain because of immediate, electrifying results.

addiction –n. a strong harmful need to regularly do or have something

retail –adj. related to the sale of goods to the public in relatively small amounts

compulsive –adj. not being able to stop or control doing something

influx –n. the arrival of large numbers of people or things

account – n. a report or description of an event

stable –n. a state of being not easily changed, not gaining or losing value quickly